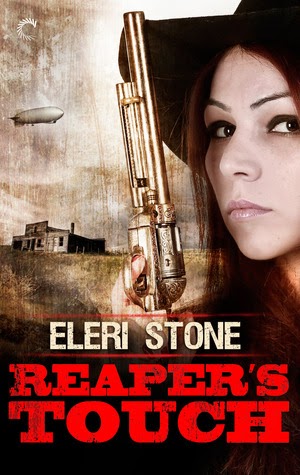 Abby is a Ranger, part of an elite group who defend the border against Reapers—humans infected with a parasite that turns them into mindless cannibals. Rangers are immune to Reaper infection, and as one of the only female Rangers, Abby is expected to settle down and breed more Rangers—a fate she’s keen to avoid. When she’s ambushed on the plains, she’s ready to go out with guns blazing—until a mysterious, handsome cowboy rides to her rescue.

Jake has his own motives for helping Abby, beyond aiding a damsel in distress. He’s a Reaper, and while he’s learned to wrest control of his mind from the parasite, the effects won’t last without a permanent cure. And he needs Abby to get it.

Abby and Jake are natural enemies and unlikely partners. But when their search reveals a conspiracy between Reapers and the rich industrialists who own the mountain cities, they must work together to find the cure—or lose the border, and each other, forever.

Reaper’s Touch is an unexpectedly addictive and fresh story by Eleri Stone that weaves the old west together with zombies in this fun and deliciously told romance.

Personally, I found Reaper’s Touch to a fresh, exciting and enjoyable read. Launching into an intriguing story straight off the bat, Eleri Stone has thought outside the box with her western tale that mixes cowboys and zombies, or more specifically "Reaper’s" and "Ranger’s" together with danger and romance. I really liked the world Stone has thought out in this book. It’s different from anything I’ve read before, mixing an old western setting together with an alluring zombie tale.

Reaper’s Touch is well written, with likable characters and an engaging story. Told in dual POV, Reaper’s Touch depicts an old western style world where zombie-like individuals known as Reapers; unfortunate individuals who have been bitter and infected by a parasite that takes over than body and force them to crave and consume human flesh. Highly contagous to men and deadly to women, Reapers are a harsh danger and it’s up to the Rangers hunt them and society.

Following Ranger Abby and Reaper Jake—two people who are unlikely to be allies but who form an unexpected connection, Reaper’s Touch has a great character dynamic. Stone’s heroine Abby is feisty and willing, featuring unforseen vulnerabilities, and is genuinely easy to follow. Her voice is likable and the girl is able; making it near impossible not to like her.

Abby’s counterpart Jake is very much the tortured hero; tormented by what he is and the urges he experiences. Struggling to maintain control over his "rider", the parasite that dictates a lot of Jakes notions and urges, Jake is at times distant and moody, but is actually a good guy. Despite his Reaper status, Jake has managed to get a decent grip on the rider within him, thanks to decades of practice.

Honestly, I loved both Jake and Abby. I don’t have a bad word to say about them. As individuals they were great, and together they were even better. Even though this book is an adult book, I really liked the fact it wasn’t overly sexual. There are plenty of sexual undertones where Jake and Abby are concerned in Reaper’s Touch, but Eleri Stone does a good job of building upon the sexual tension and attraction that simmers between the two. The majority of physicality that happens between the two happens right at the end of the book, but the smaller moments of passion are more than enough to keep one entertained.

Abby and Jake have more than their fair share of obstacles to overcome. Even though Abby is insanely attracted to Jake she does struggle with the fact he is a Reaper throughout the story; someone I actually liked. This seemed realistic. Seeing Abby truly question her beliefs and idealisms where Reapers are concerned thanks to what she discovers in Jake was very fitting. Nothing she felt

seemed rushed or forced, and I really enjoyed seeing the two of them get to know one another and rely on one another as they fought to protect Abby’s people from Reapers.

My only issue was that the ending was a little too rushed for my liking. We spent the whole book building up to something; both Jake and Abby’s relationship and the possibility of a cure, and then it seemed to be over in the blink of an eye. Eleri Stone needed to detail this last chapter a bit better in my opinion; things were glossed over, that should have been explored in length.

Fast paced, exciting and deliciously romantic, Reaper’s Touch is a great read. Hold on to your hats ladies and gentlemen, it’s battle time!

Source: Sent for review by Book Monster Promotions and the author (Thank you ladies!)
Format: Kindle ebook!
Buy it: Amazon | Barnes & Noble | Kobo
My Recommendation: If you're looking for something a little different, this western zombie read will be perfect for you!
Cover: Fits the story excellently
Will I read sequel/continue with series: Yes, I can't wait for the next book!