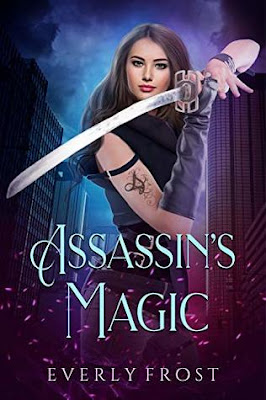 Is love worth the danger?

When Hunter Cassidy plans to infiltrate the Assassin's Legion, posing as an assassin-in-training, she is prepared to encounter danger every step of the way. What she doesn't expect is the ruggedly handsome and relentlessly fierce trainee, Slade Baines.

It's hard enough that Hunter is the first female to be accepted to train with the Master Assassin himself. Even when she beats the other candidates, the Master ranks her lowest of all. In the male-dominated Legion, the other trainees see her as a weak link to be driven out of their ranks.

When they try to force Hunter out, Slade gets in their way, becoming an unexpected ally. Despite her best intentions, Hunter finds herself lowering her guard around him, which only makes carrying out her secret mission more difficult and puts her in danger of falling for him.

But there's more at stake than Hunter's heart. The Master Assassin possesses the key to locate a weapon that Hunter must ensure remains hidden at all costs. In her quest to stop this deadly power from falling into the wrong hands, she must make a choice between following her heart... or fulfilling her destiny.

Assassin’s Magic is the first novel in Everly Frost’s series of the same name and is a fast paced and deeply addictive urban fantasy full of magic, action, danger and romance!

Having seen her mother die, Hunter Cassidy plans to infiltrate the Assassin’s Legion in order to avenge her death and recover the relic her mother died trying to protect. Pretending to be an assassin-in-training, Hunter thought she was prepared for danger, but she certainly wasn’t prepared for Slade Baines, a fellow candidate and someone who treats Hunter with respect and kindness. In the male dominated Legion, Hunter is the first female to train with the Master Assassin and seen as weak by the other candidates. All except for Slade who quickly becomes an ally. As Hunter attempts to fulfil her secret mission, getting close to Slade can only be a mistake, yet he makes her lower her guard despite her best intentions. As the Master Assassin closes in on a weapon of immense power, getting her hands on it first is the only way Hunter can ensure he can’t use it but with her growing feelings for Slade weighing on her mind and clouding her vision, will Hunter be able to make difficult choices or will the Master Assassin find a way to destroy her first?

As the first novel by Everly Frost I have ever read, I have to say I was very impressed by Assassin’s Magic. Heading into the story I don’t think I was as prepared to like the characters and the story as much as I did, but I will say one thing…..I’m seriously hooked! Perfectly paced, Assassin’s Magic introduces readers to an intriguing world of magic and monsters where certain individuals train to become assassins and hunters of things that go bump in the night.

Assassin’s Magic unfolds through the perspective of Hunter Cassidy, a young woman with secrets. I genuinely loved Hunter and thought she was intelligent, capable and kick-ass. Her voice is distinct and easy to follow with author Everly Frost writing Hunter as someone you can’t help but like. I felt she was honourable and mission orientated even as it becomes clear that she has many secrets and isn’t what people think she is.

Everly Frost implores some really interesting mythology within her novel and I’m really keen to see more of her take on Keres and Valkyries. Greek myth is some of my favourite and I always enjoy seeing something a little different which I think Frost manages to succeed with in Assassin’s Magic. I appreciated the way Frost slowly revealed certain parts of Hunter’s past and heritage and allowed readers to come to their own conclusion about what is happening while also making sure you needed to know more.

There’s so much about Assassin’s Magic to love—the mythology, the action, the mystery and most definitely the romance. Hunter and Slade’s romance has that slow burn feeling that develops over time from the initial attraction to slithers of friendship with an undeniable chemistry. I really liked seeing Hunter let Slade in. Slade was sexy and capable while also being kind and respectful and he clearly cared about Hunter. They have plenty of obstacles in the way of their relationship, the biggest of which the truth about what Hunter is, but I for one am cheering for them and can’t wait to see them find their way to each other again.

Thrilling and very enjoyable, Assassin’s Magic felt like The Mortal Instruments by Cassandra Clare meets Poison Study by Maria V. Snyder and is something I can’t wait to continue with. I’ll be starting the next novel straight away to see what Everly Frost has in store for Hunter next!