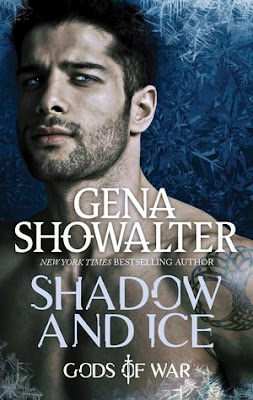 Gena Showalter, the New York Times bestselling author who brought you the Lords of the Underworld, introduces a brand-new scorching new paranormal romance series…GODS OF WAR.

Knox of Iviland, the most ruthless warrior in All War history, has spent his life fighting others to the death, winning new realms for his king. Now the stakes are higher than ever. If he prevails in the battle for Earth, his slave bands will be removed. Victory is his sole focus…until he meets her.

On an arctic getaway with her foster sister, street tough but vulnerable Vale London is shocked to stumble upon a cave filled with ancient gods waging epic combat. When she is inadvertently drawn into their war, she is forced to team up with an unlikely ally—the sexy god who makes her burn with desire.

Though Vale is his enemy, Knox is consumed with lust and a fierce need to protect her. But only one combatant can triumph, and he will have to choose: live for freedom, or die for love.

Shadow and Ice is the first novel in Gena Showalter’s new PNR series Gods of War and introduces readers to a new band of alpha men and the strong women who are going to bring them to their knees.

Knox of Iviland is the most ruthless warrior in All War history. He has won more wars and realms for his king than anyone else. Now the stakes are higher than ever. If he wins the battle for Earth he’ll be given the one thing he’s always wanted; his freedom. Victory is almost guaranteed until he meets a woman who has him questioning his desires. Street smart Vale London just wanted to enjoy an Arctic getaway with her foster sister. She never expected to stumble upon a cave filled with ice encased immortals. When she is reluctantly drawn into their war, Vale has no choice but to team up with an unlikely ally—-a brutal but sexy immortal who makes her burn with unexpected desire. Vale wants to stay alive and Knox needs to win but with working together seeming to stroke the fire that burns between them will Vale and Knox discover more than they planned; will they find a love more important than any battle.

Gena Showalter has been a favourite author of mine for many years. Ever since I read her first Lords of the Underworld series I have been addicted to her novels. I have been a little underwhelmed by a couple of her most recent ones (we will not speak of the William/Gillian disappointed) but I felt that Shadow and Ice was a return to the Gena Showalter tales of old and a great start to a promising new series!

Shadow and Ice unfolds through the varying perspectives of both main characters Vale and Knox. This is my favourite way to read PNR as I feel it allows readers the best opportunity to understand the feelings, emotions and thoughts of the characters as they embark on an often crazy journey. Showalter’s writing is always passionate, sexy and full of humour. She keeps things light but highly entertaining with intricate storylines that usually involve a great cast of side characters---as is the case with Shadow and Ice. I know Bane and Nola’s is next but I’m looking forward to Zion’s as well as having the opportunity to get to know some of the other immortal players.

I liked Knox and Vale easily enough. Knox was very alpha male while Vale was a fairly competent modern century woman. My only fault with Vale was that she seemed to feel like she needed a man to want her to be validated. I understand as a foster child she would have gone looking for such validation if she wasn’t given enough love, but I still disliked Vale’s frequent insecurities and sadness over not being wanted. I actually found this to be distasteful to her character. Vale shouldn’t have needed a man’s desire to be complete; she was more than enough on her own.

Reminiscent of the success Gena Showalter has found with her Lord’s of the Underworld series, Gods of War has a lot of potential as a series. I’m looking forward to reading more and discovering just what she has planned with the ongoing storyline and the multitude of characters we have already been introduced to.