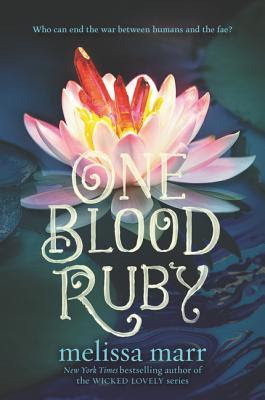 In this gripping follow-up to Melissa Marr’s lush Seven Black Diamonds, Lily and her friends are forced to reckon with the truth of their own lineage and to protect one of their own, no matter what—or who—comes between them.

Now that Lilywhite Abernathy is the heir to the Hidden Lands, everything is about to change.

The Queen of Blood and Rage wants Lily to help broker peace with the human world, but Lily knows that harmony won’t come easily. After decades of waging war on the humans, who cost the queen her firstborn daughter, the fae are struggling to accept Lily, a half-human monarch. And the humans, while no match against faery affinities, will hardly agree to the queen’s détente without resistance.

Lily wants to be a fair ruler but fears having to abandon the life she’s known. Now that she and Creed are more than just fellow Black Diamonds—operatives for the queen—her priorities have shifted. But her worries about assuming the throne are derailed when it becomes clear that someone—or some fae—is masterminding violent attacks to discourage peace.

Who can end the war between humans and fae?

One Blood Ruby is the second novel in Melissa Marr’s Seven Black Diamonds series and is a deeply engrossing sequel that is filled with danger, adventure and romance.

After discovering her true Fae heritage, LilyWhite Abernathy has accepted her role as heir to the Hidden Lands and the combined Seelie and Unseelie thrones. After decades of raging war with the humans, the Queen of Blood and Rage is open to brokering peace with the human world and Lily knows her position in both worlds is the key to securing this. Alongside their fellow black diamonds, Lily and her new boyfriend Creed stand alongside Lily’s newly found fae family to create a new peaceful world but with recent violent attacks on humans leaning towards a fae involvement is the hope for peace over before it has even begun?

Having fallen in love with Seven Black Diamonds, I jumped into One Blood Ruby as soon as my copy arrived and was delighted to find all the aspects I loved about the first novel alive in its sequel. Picking up where the first novel left off, One Blood Ruby is a thrilling and exciting story full of romance, friendship and blossoming familial connections.

One Blood Ruby continues to follow Lily primarily but is also told through the varying perspectives of Creed, Eilidh, Zephyr, Will and Violet as well, offering readers a very well rounded and inclusive view of the happenings within the novel. I genuinely love all the characters and enjoy seeing them individually and as a group as they connect and fight for one another.

Melissa Marr is very inapt at creating darkly riveting and complex characters with different personalities, desires and drives. One Blood Ruby continues to feature characters like this who are all very different but complement one another immensely. Fae, fae-blood or human, Marr writes her characters fiery, passionate, capable and endlessly thrilling to follow. I like their wit, attitude and mannerisms across the board and feel like the cast of characters within this series is truly fabulous.

As the Hidden Lands and human worlds look to unite, we see a more maternal and almost human side to the Queen of Blood and Rage. Amongst the romance, friendship and action of the story, it was sweet to see Endellion motherly towards her newly found granddaughter Lily and even her grandson Zephyr. This made for a nice touch to the story and balanced nicely with other aspects that were at play.

One Blood Ruby was another fabulous novel from Melissa Marr filled with excitement, danger and even unexpected loss. Emotional and riveting, One Blood Ruby leaves me highly excited about seeing more of the characters and I will be keeping my fingers-crossed and my eyes peeled for another novel in the series as I would love to see what Melissa Marr does next!

Source: Purchased by me
Publisher: HarperCollins
Format: Paperback
Release Date: May 1st 2018
Buy: Angus & Robertson | Booktopia | The Book Depository | Amazon
Final Thoughts: I'm absolutely loving this series and hoping there will be more in this series in the near future---love it!