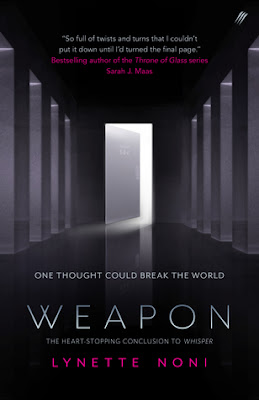 I already knew he was a psychopath. But now?
He's more dangerous than ever.
And I have less than twenty-four hours to stop him.

After escaping Lengard and finding sanctuary with the Remnants, Alyssa Scott is desperate to save those she left behind ─ and the rest of the world ─ from the power-hungry scientist, Kendall Vanik. But secrets and lies block her at every turn, and soon Lyss is left questioning everything she has ever believed.

When long-lost memories begin to surface and the mysteries of her past continue to grow, Lyss battles to retain her hard-won control. Allies become enemies and enemies become allies, leaving her certain about only two things: when it comes to Speakers, nothing is ever as it seems... and the only person she can trust is herself.

Weapon is the sequel and conclusion to the Whisper duology by Lynette Noni and is a forward moving and sharp tale with twists that readers are guaranteed not to see coming.

After escaping the clutches of Lengard’s power hungry scientist Kendall Vanik and finding refuge with a rebel group of Speakers known as the Remnants, Alyssa Scott is desperate to save those she was forced to leave behind. As a Creator, Lyss on one of the most powerful Speakers there is, but her past is shrouded in mystery and the more memories she recalls, the more her questions grow. Discovering the truth may be the secret to discovering who she can trust, but as enemies become allies and allies become enemies, keeping her control may be the best shot she has and Alyssa isn’t even sure she has that.

Let me begin by saying that I LOVE Lynette Noni and I LOVE her Medorian Chronicles but while I enjoyed Whisper and its sequel Weapon, I didn’t love it. I wanted to, oh how I wanted to, and I tried really hard but something about the story fell flat at times for me. I still honestly believe without hesitation that this novel and its predecessor Whisper are solid reads; set in Australia, Weapon is well told and paced, perfectly written and with an engaging storyline. There was just something I needed I didn’t find in Noni’s duology as I have with all her previous novels.

Perhaps it was the fact that only two novels didn’t seem enough time for Noni to fully explore her world and the characters. I think she did a brilliant job with setting up Whisper but then Weapon failed to really soar—I wanted to delve further into Alyssa’s past and the world of the Speakers. I wanted to learn every nook and cranny of the various Speaker groups we were introduced to; not just be told about them—I wanted to see.

I was also disappointed by the lack of Ward in this novel, although I understand the reason for this where the storyline was concerned. I think the ending to Alyssa’s journey, though satisfactory---tying things up nicely while leaving plenty of hope for the future---would have been better felt by me as the reader if it didn’t seem rushed. All the danger surrounding Alyssa and her friends and it was all over in a few short chapters with the danger demolished…..it was too easy.

All thing being said, Weapon was a story I did enjoy reading as I honestly liked the characters and will read anything Lynette Noni writes. Though not as exceptional as I was hoping it would be, I do recommend this to readers wanting something set in Australia with an authentic Aussie setting who love their tales with a twist!