Welcome to the Blog Tour for The Necromancer’s Bride by Kat Ross thanks to Xpresso Book Tours! I'm thrilled to be helping Kat Ross share this brilliant book with the world and highly recommend. 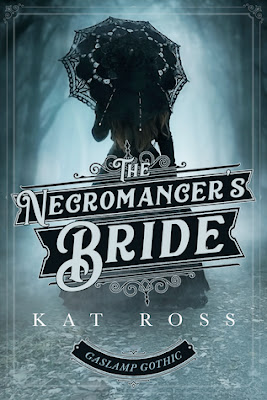 A self-appointed soldier of God with a penchant for ruthlessly punishing his enemies, he vanished after Anne Lawrence stabbed him with his own dagger.

The smart thing would be to let him go.

Determined to heal the rift between them, she goes in search of her tempestuous former lover, black parasol in hand and daeva magic crackling at her fingertips. But Gabriel has his own plans afoot and Anne finds herself drawn into one of his tangled webs, much against her better judgment.

Gabriel’s nemesis has reappeared in Brussels, a vile slaver who’s plundering the Congo Free State with the blessing of King Leopold. Gabriel might be willing to give Anne a second chance, but not until Jorin Bekker’s head is lying at his feet.

Back in London, the quasi-reformed necromancer Balthazar sets his sights on the same quarry. He holds a very personal grudge against Bekker — and killing him might be the only way to keep Gabriel D’Ange from Balthazar’s own throat.

When the hunters collide at a lavish gala thrown by the king, Anne learns just how far she’ll go to save the man she loves.

Note: The Necromancer’s Bride is the sequel to A Bad Breed, which should be read first.

From The Necromancer's Bride....


Anne usually rose with the sun, but a feather bed made for a pleasant change from hard sand and whining mosquitoes, and she slept late the next morning. She stretched luxuriously and threw the covers off. Being clean, rested and well-fed had its advantages. Her mood was much improved and she felt ready to deflect any slings and arrows Gabriel cared to hurl at her without losing her own temper.

I’ll kill him with kindness, she thought, dragging a brush through her hair and pinning the heavy mass of it up. Just like I did before.

Sunlight poured through the half-open shutters as she padded to the window in Gabriel’s shirt. Her own clothes would be dry by now, although the thought of donning a black dress again was unappealing. Men’s attire was much more comfortable than the torturous layers required of women. Anne threw the shutters wide, frowning as she heard grunting below.

Jacob and Julian were down in the yard, stripped to the waist and sparring with their chains. Julian was lithe and wiry like a cat, while Jacob had slabs of muscle on his chest and back, but the two seemed evenly matched. One end of the chain was fixed by an iron manacle to the wrist. The other was weighted with a heavy collar – just the right size to encircle a human neck.

But they weren’t using the chains for that purpose now. No, they were trying to tangle each other up, grappling like lunatics, heedless of the vicious bruises and cuts the heavy iron links inflicted as they whipped through the air. Anne watched, repelled and fascinated. Blood covered them both, though the wounds closed within seconds. Accelerated healing was one of the necromancers’ greatest gifts. Daevas recovered quickly, too, but not like them.

Anne had no idea necromantic chains could be used this way. At Gorgon-e Gaz, the Antimagi carried swords. They wore the chains but only to herd their human cattle. She wondered if it was a technique of Gabriel’s invention.

The moment she thought this, he appeared from the kitchen door. Jacob and Julian broke apart, panting.

“Where’s Anne?” Gabriel asked. He looked rough and bleary-eyed, as if he’d just awakened himself.

“Give him your chains,” Julian said to Jacob with a grin.

Julian smiled. “I’ll get the better of you one of these days.”

“Hope never dies,” Jacob said. “Though in your case, it really ought to be buried alive and nailed into the casket.”

And then Gabriel was pulling the shirt over his head and Anne saw how thin he’d grown, each rib prominent, though he was still corded with lean muscle. Jacob tossed him the chains, which Gabriel caught gracefully with one hand.

Anne drew a sharp breath, her fingers gripping the sill.

But she couldn’t look away.

They squared off ten feet apart. Gabriel held the chains loosely in his left hand, leaving a coil of links to dangle at his side. His posture was relaxed, weight tipped slightly forward. He let Julian come to him and their first few exchanges were brief and testing. Then Julian seemed to tire of the foreplay, rushing forward with his mouth set in a line. Anne flinched every time the chains cracked across Gabriel’s bare flesh, though he barely seemed to register it. He absorbed the assault for two long minutes, and then his own movements became inhumanly fast and ferocious. She heard the brittle crack of bone. Seconds later, Julian lay in a groaning heap.

Gabriel sank to his haunches and held out a hand, hauling Julian to his feet. He supported him with an arm around his shoulders until Julian shook it off. Whatever had shattered seemed whole again.

“He thinks if he curses in French, God won’t hear him,” Jacob said.

Julian gave a ragged laugh. “Now you have to defend my honor, brother.”

“Not you, too,” Gabriel said to Jacob with a touch of irritation. He wasn’t even out of breath. “Julian already delayed my breakfast.” He glanced at the clothesline, where Anne’s knickers snapped in the breeze. “Unlike you two, I have things to do this morning.”

Jacob only smiled and coiled his chains in readiness.

And so it began again, blood running freely, the chains blurring in deadly arcs. Then Jacob did something complicated, reversing the swing in midair, and the next instant Gabriel was sitting on his rump in the dirt, ankles neatly trussed. Julian crowed and Gabriel laughed in delight and despite the stupid brutality of the entire exercise, the sound made Anne wistful. She realized she wanted more than anything to make him laugh like that again.

“Maybe I should beat the holy hell out of him,” she muttered. “That seems to do the trick.” 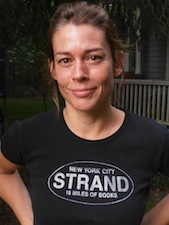