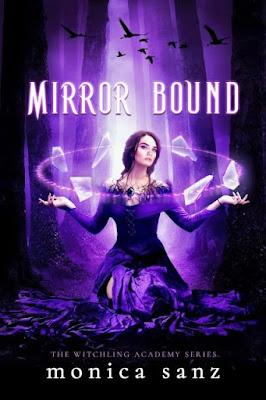 Seraphina Dovetail is used to being called all these things. As the seventh-born daughter to a witch, and the cause of her mother losing both her powers and her life, Sera has always felt isolated. Until Nikolai Barrington.

The young professor not only took an interest in Sera—he took her into his home, hired her for his moonlighting detective agency, and gave her the one thing she’d always dreamed of: a chance. Under Barrington’s tutelage, Sera can finally take the School of Continuing Magic entrance exam to become an inspector and find her family. Now if only she could stop her growing attraction to her maddening boss—which is about as easy as this fiery elementalist quitting setting things on fire.

But when ghosts start dragging Sera into possessions so deep she can barely escape, and then the souls of lost witches and wizards appear trapped in mirrors, these two opposites will have to work together to uncover a much deeper secret that could destroy the Witchling world…

Mirror Bound is the second novel in The Witchling Academy series by Monica Sanz and is a darkly beguiling sequel that will rival its predecessor with is enigmatic storyline, lush writing and slow burn romance.

Seraphina Dovetail is a seventhborn; the seventh child of a witch and the cause of her mother’s loss of powers and life at the time of Sera’s birth. Scorned, ostracised and ridiculed, Sera has always felt alone. Until she met Nikolai Barrington. The young professor not only took an interest in Sera’s studies but he opened up his home to her when she was expelled from the Aetherium’s Witchling Academy. Sera dreams of becoming an Inspector and one day possibly finding her family, but with her memories locked away in her mind, finding out who she is seems like a faraway dream. Working alongside Barrington offers Sera a reprieve and an outlet for her magic and curiosity but as her affection and attraction to Barrington grows, Sera struggles with the knowledge a future between them is next to impossible. As their latest case sees missing children and ghosts dragging Sera into possessions so strong she looses grip on who she is, Sera will need to lean on Barrington and trust him with all she is if she has any hope of surviving.

I have to say before anything else that I am without a doubt bewitched by this series. Enchanted. Enthralled. Captivated. And absolutely in love with Sera and Barrington. As with the first novel Seventh Born, Monia Sanz once again sweeps her readers into a darkly magical world of defiance, magic and blossoming romance. Vivid and alluring, the setting is entrancing and protagonist Sera’s voice effortless to follow. Sanz details a rich and passionate gothic-esq atmosphere and keeps her readers bewitched with the mystery and intrigue she adds to the storyline as Sera and Barrington investigate a case of missing seventhborn children.

Mirror Bound once more unfolds through the perspective of protagonist and seventhborn Seraphina. Readers will have discovered Sera’s history in the first novel and be aware of all she must overcome as a seventhborn. Sera’s life has been one of pain, ridicule and cruelty in a society where people believe seventh children to be cursed and monsters. Sera fights to rise above her place and I genuinely adore all she is and all she is battling to become. Sera’s voice is a strong and passionate one. She’s not perfect and has her moments of vulnerability but she’s intelligent and forward thinking and genuine to follow. I feel like she has been continuously growing throughout each novel and I can only imagine the person she is going to be by series end.

After a lifetime knowing only isolation and loneliness, Sera has found a true friend and ally in the form of Nikolai Barrington, a professor and inspector who has taken her on as assistant. Theirs is a relationship full of respect and value, but also attraction, with a undeniable chemistry simmering between them. The slow burn of their romance shines throughout Mirror Bound with Monica Sanz weaving moments of electricity and tenderness to their exchanges. I adore seeing them together and have no shame in admitting their relationship is a highlight of the series for me; I devour any moments where they are together and feel like their romance has been written spectacularly by author Monica Sanz.

Rich and haunting, Mirror Bound was an exciting novel that was beautifully written and paced and features a heroine you can’t help but get behind. Monica Sanz builds this instalment to a shocking final few chapters and leaves me dying to see what is next in store for Sera and Barrington—I can’t wait for the opportunity to join them in their adventures once again!