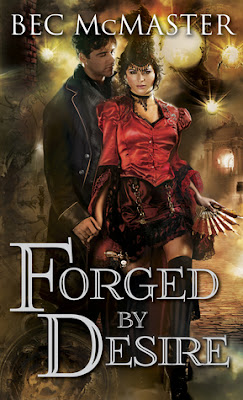 Nine years ago, Perry fled her thrall contract to find sanctuary among the Nighthawks. In that time, she's become a respected member of the Guard, and she's wanted Garrett Reed for as long as she can remember. But when a new case takes a chillingly familiar turn, Perry finds herself once again in the path of a madman...only this time, there's nowhere left to run.

A desire that can't be tempered...

Out of their depth and racing against time, Perry and Garrett must learn to trust the desire sparking between them...or risk losing themselves forever to the darkness stalking London's streets.

Forged by Desire is the fourth novel in the London Steampunk series by Bec McMaster and is a passionate and explosive tale of romance, vampires and danger.

Nine years ago Perry fled a thrall contract and joined the Nighthawks, becoming a respected and capable member of the team. Perry has found happiness in her new life and a best friend in Garret Reed, fellow Nighthawk and the man Perry has loved for years. Garret has recently taken on the role of Guild Master and leader of the Nighthawks but it’s the recent change in his friendship with Perry that has been foremost on his mind....and the way he suddenly burns for her. Perry has put her old life behind her but when a recent case show stark similarities to something in her past, Perry must confront it in order to move on and explore the desire that summers between her and Garret before it’s too late....

As the fourth instalment in a deliciously addictive and romantic steampunk series, Forged by Desire is another highly enjoyable read. Featuring Nighthawk members Garrett and Perry, Forged by Desire is passionate, steamy and oh, so good. I admit it’s not my favourite in the series—probably the one I’ve enjoyed least so far, but it was still an amazing novel that captured my attention from the very beginning until the end.

Garrett and Perry are our main characters and individuals who have known each other for years. Though Perry has been secretly in love for Garrett for a long time, it is only recently that he has begun to see her as more than just his partner and friend. He has finally opened his eyes to her as a woman, and discovered that she is a woman he very much wants.

Garrett and Perry were both wonderful characters, with Perry being a real mystery in recent novels as she hinted at a wealthy upbringing. It was great to finally discover Perry’s past and to see Garrett pursue Perry so diligently. Garrett knew what he wanted—Perry—and was determined to show her that the was the man for her, even as she fought to protect him from the monsters of her past.

Bec McMaster continues to sweep me up with this series. I’m in love with the characters and the steampunk world McMasters has so perfectly crafted. I enjoy seeing former leads weave in and out of the novels and falling in love with new protagonists time and time again. I’m ready to jump straight into Leo’s story now for I have no doubt it’s going to be brilliant!