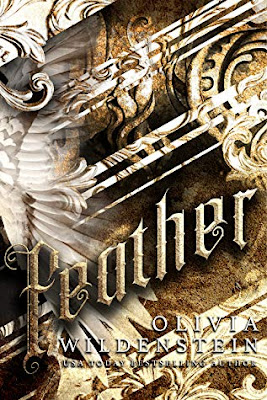 It was supposed to be a quick mission. The only thing quick about it was how rapidly I failed.

With only a month left to earn her missing feathers, twenty-year-old Leigh embarks on a trip to Paris to meet her newest project, twenty-five-year-old Jarod Adler, leader of the Parisian Mafia and the worst kind of sinner . . . a Triple.

If Leigh can get Jarod to accomplish a single act of kindness, she stands to win 100 feathers, more than enough to complete her wings and ascend to Elysium, the land of angels.

What she doesn’t count on is Jarod's dark charm costing her feathers.

A heart he longs to hear beat only for him.

Feather is Olivia Wildenstein’s latest release and is a passionate and whimsical angel romance, loosely based on the classic Romeo and Juliet tale.

Twenty-one-year-old angel Leigh has only one month left to earn her missing feathers before she loses her wings forever. Desperate to ensure she ascends to the Heavenly realm, Leigh decides to take on a sinner whose shot at redemption is almost non-existent; twenty-six year old Parisian Mafia leader Jarod Adler and the worst kind of sinner….a Triple. If Leigh can convince Jarod to complete a single act of kindness she’ll gain 100 feathers—more than enough to ascend. What Leigh isn’t counting on is Jarod’s dark charm drawing her in and actually costing her feathers. Leigh’s determined to save Jarod’s soul, but as she finds herself falling for the unexpected sinner, Leigh discovers that Jarod is connected to her world in ways she never could have imagined. Falling in love was never the plan but when it becomes clear a future without Jarod is in the cards if she can’t save him, Leigh will need to decide who she is and what she truly wants if she has any chance at true happiness.

As always, Olivia Wildenstein is an author who never fails to impress. Her Lost Clan series will forever remain a favourite of mine and Feather just proves that she has more incredible stories up her sleave. Initially I was under the impression Feather was to be a standalone tale, but after reading the novel I’m excited about it being a part of a series and continuing on with Celestial to feature Feather supporting character Celeste.

Feather introduces readers to Leigh, a fletchling angel who has spent her life helping sinners in an effort to complete her wings and ascend to Elysium, the land of angels. Leigh is a kind and wholesome individual. She genuinely believes everyone can be saved and is deserving of such which is why she decides to take on a sinner long thought unsavable by her fellow angels. Admittedly there is a personal motivation behind Leigh’s decision, but I won’t share too much of this to avoid spoilers.

I thought Leigh was a sweet protagonist to follow. She believed in love and honestly wanted to help those under her care. I really liked Olivia Wildenstein’s take on angels and am intrigued by the hierarchy. I liked that Leigh wanted things to be different and enjoyed seeing her grow as Jarod opened her eyes to passion and the smaller things in life.

Intermingled with aspects of the traditional Romeo and Juliet story, Feather was a solid read from Olivia Wildenstein. Set in the beautiful city of Paris, Feather is woven together with culture and life as Wildenstein creates an electric and steamy love story. I’m entranced with the world and characters and hope to see more of Asher, Celeste and even Eve in future tales!

Feather is definitely worth a read for those looking for an angel tale with a twist. Imbrued with passion and promise, Feather builds to a climatic ending and leaves me eager to see what Olivia Wildenstein has planned in this new series next!