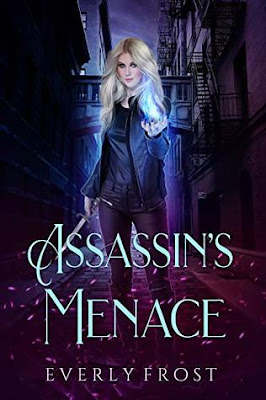 Never step between an assassin and his prey...

Nobody would suspect curvy, blonde bookworm Grace Kennedy of being a cold-blooded killer. She just wants to keep her head down and escape the violent secrets of her past.

But when Grace unwittingly gets between an assassin and his target, she becomes prey to Boston's most ferocious legion of killers.

If finding a way out of the life-threatening mess she created isn't hard enough, her unexpected encounters with Cain Carter prove even more unsettling.

Ruthless millionaire on the outside, sexy as hell in private, Cain is determined to make sure Grace survives her own secret power, as well as his.

When the Legion closes in and the power inside Grace threatens to tear her apart, Cain will have to sacrifice what he loves the most if he wants Grace to survive.

Assassin’s Menace is the third instalment in the Assassin’s Magic series by Everly Frost and introduces readers to a new voice and heroine in this kick-ass and riveting adventure full of action, romance and edge of your seat moments.

Bookworm Grace Kennedy isn’t who she appears, and she’s spent a lot of time and effort ensuring this is the case. No one would suspect that she’s actually a killer and she intends to keep it that way--- hoping to escape her violent past as much as possible. Then Grace unwittingly gets between an assassin and his target, becoming prey to Boston’s most vicious legion of killers. Help comes in the unexpected form of Cain Carter, ruthless millionaire and someone who is much more than he seems. Cain is determined to keep Grace alive even if it means going against his brother assassins, but for a girl who has never known kindness, Grace is sure Cain’s help comes with strings. Sexy as hell, Cain could become Grace’s weakness if she lets him, but with unforeseen powers simmering inside her, trusting Cain my be Grace’s only choice….if only she can trust him with her heart too.

Can I just say; Everly Frost is the bomb! Seriously this woman knows how to get my blood pumping and the adrenaline running with her edge-of-your-seat stories and exhilarating endings. Assassin’s Menace is the third instalment (book number 2.5 if you want to be specific) in Frost’s sensational Assassin’s Magic series and takes place between Assassin’s Mask and the upcoming final novel, Assassin’s Maze.

Stepping away from normal protagonist Hunter for the first time, Assassin’s Menace introduces readers to Grace Kennedy, an equally awesome and kick-ass heroine who quickly captured my heart with her determination, strength and capability. I’ll try not to give away spoilers where I can, but Grace is vital to Frost’s overall series, something that was fairly obvious to me heading into the novel. Readers of the series should catch on pretty quickly why and this will make it all super exciting as you discover Grace and what she can do.

It was fabulous to finally see Cain Carter meet his match in Assassin’s Menace and I couldn’t be happier that he was paired with Grace. Theirs is a romance that builds beautifully, and their chemistry is electric and driven. You knew where it was heading but that didn’t make seeing them fall for one another any less satisfying.

Everything really comes together with Assassin’s Menace. Everly Frost ties previous storyline arc’s together and allows the readers to discover where she was heading with certain hints and titbits that were suggested in the previous novels. I loved the inclusion of Cain’s sister Parker who is a real sweetie—and someone I’m hoping will be paired with Lutz Logan—and thought her inclusion to the story was really adorable.

Thrilling and so very good, Assassin’s Menace was another brilliant read in a series I genuinely adore. I can’t wait to see what Everly Frost has planned for the fourth and final instalment—I have no doubt it will be spectacular!