Book Shelf: The Queen of Nothing (The Folk of the Air #3) by Holly Black 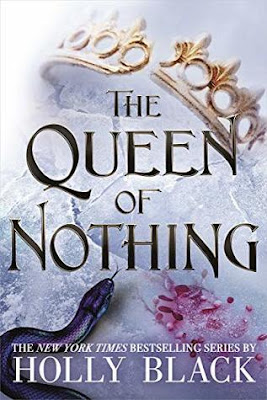 Power is much easier to acquire than it is to hold onto. Jude learned this lesson when she released her control over the wicked king, Cardan, in exchange for immeasurable power.

Now as the exiled mortal Queen of Faerie, Jude is powerless and left reeling from Cardan’s betrayal. She bides her time determined to reclaim everything he took from her. Opportunity arrives in the form of her deceptive twin sister, Taryn, whose mortal life is in peril.

Jude must risk venturing back into the treacherous Faerie Court, and confront her lingering feelings for Cardan, if she wishes to save her sister. But Elfhame is not as she left it. War is brewing. As Jude slips deep within enemy lines she becomes ensnared in the conflict’s bloody politics.

And, when a dormant yet powerful curse is unleashed, panic spreads throughout the land, forcing her to choose between her ambition and her humanity…

From the #1 New York Times bestselling author Holly Black, comes the highly anticipated and jaw-dropping finale to The Folk of the Air trilogy.

The Queen of Nothing is the tantalizing and beguiling final novel in The Folk of the Air series by Holly Black and is a phenomenal way to conclude what has been a breathtaking series from the very first page to the very last.

After being crowned Queen of Faerie and subsequently exiled by her wicked husband King Cardan, Jude Duarte spends her time in the mortal world watching television with her brother Oak and sister Vivi and doing the odd job for the fae folk that live within the human realm. Having spent her life in the Fae world, a life in the human one is bland and uneventful….until her twin Taryn arrives as asks Jude for a favour. Taryn is in trouble and to help her, Jude will have to return to the world of Faerie. This means facing Cardan, whose betrayal still hurts but who Jude can’t help but still love despite his actions. When a curse is unveiled, Jude has no choice but become the first ever mortal Queen of Faerie to save Cardan and the world she reluctantly loves…..

Holly Black has entranced me with this series from the very moment I began reading The Cruel Prince. The beautifully written storyline, enchanting setting and layered, multi-dimensional characters bring the series to life with poise and excitement. I honestly believe that nothing I can say will do this series justice and eloquently describe how much I love and adore it. It genuinely does deserve all the hype surrounding it and is without a doubt deserving its place as one of the best fae series out there.

Continuing to follow mortal girl Jude, The Queen of Nothing picks up after the shocking conclusion of the previous novel and begins by detailing Jude’s time in exile. Banished from her home in the world of Faerie, Jude is struggling to assimilate in the mortal realm and yearns for the place from which she was expelled. Jude has been a fabulous protagonist from the very beginning of the series and I have highly enjoyed following her with each novel. Jude is a mortal in a world of wicked fae. At a disadvantage thanks to her human weakness and fragility, Jude has had to be as cunning and calculated as her fae companions, if not more so, in order to survive. Jude’s intelligence, capability and determination is something to be admired. As does her love for her family and those within her inner circle. I feel that Jude has grown into a formable young woman and now Queen over the course of the series and Holly Black has done her a real service writing her in such a manner.

Throughout the trilogy Jude’s nemesis, love interest and reluctant alley has been Cardan, former Prince of Faerie and now High King. What can I say about Cardan other than that I love him? I love him with his wickedly deceptive and devious nature. With his cheeky attitude and laid back approach; his reluctantly vulnerable and unexpectedly loyal personality. I love him in all his cunning and calculating magnitude; in all his glory. I just love Cardan and think he has been a fabulous character within the series to push Jude and fight Jude and fall in love with Jude.

Holly Black has written one hell of a romance with Jude and Cardan. Never have I seen two people be so good for and so bad for each other. They have been enemies and allies; have loathed and now loved one another. They’ve pushed and pulled; fought and bickered. Betrayed and supported one another. And it’s been absolutely thrilling to watch unfold! Their chemistry has been undeniable from day one. Black has slowly built their relationship from the first novel as childhood enemies and classmates, to a King and Queen who are now deeply in love with each other to a fault. There’s no pretty words or sugary promises between them—their feelings are crushing and awkward and raw……but I really like this. I think it suits who are as individuals and now as a couple.

Throughout the entire series the twists, turns, shocks and surprises have always kept coming. Eloquently detailing the story perfectly, author Holly Black has proven once again why she is one of the Queen’s of the fae with The Folk of the Air. As addictive and beguiling as its predecessors, The Queen of Nothing brings the series to an end in spectacular fashion with an exciting but satisfying ending. Though I’m sad to see the trilogy conclude, I look forward to reliving Jude and Cardan’s story time and time again and cannot recommend this series enough!

Source: Purchased by me from Big W
Publisher: Hot Key Books
Format: Paperback
Release Date: November 19th 2019
Buy: Angus & Robertson | Booktopia | The Book Depository | Amazon
Final Thoughts: The Queen of Nothing is an absolutely sensational conclusion to this trilogy that blew me away with it's brilliance. Holly Black has outdone herself with this novel--simply brilliant.