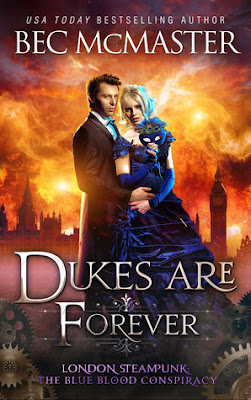 A compromising situation forced him into marriage. But has his wife been working for the enemy all along?

In a steam-fuelled world where vampires once ruled the aristocracy, the Duke of Malloryn knows his nemesis, Lord Balfour, has finally returned to enact his plans of revenge.

Malloryn can trust no one, and when incriminating photographs surface—of an enemy agent stealing a kiss from his wife—he is forced to question just why his wife, Adele, trapped him into marriage.

Is she an innocent pawn caught up in a madman's games, or is she a double agent working against him?

The only way to discover the truth is to seduce her himself...

Adele Hamilton may have agreed to a loveless marriage in order to protect herself, but that doesn't stop her heart from yearning for more.

Her husband promised her a cold marriage bed. He swore he'd never touch her. But suddenly he's engaged in a campaign of seduction—and the only way to keep her wits about her is to fight fire with fire.

The ruthless beauty has locked her heart away, but can she deny the passion that flares between them? And when the truth emerges, will she be the only thing that can save Malloryn's life?

Or the weapon his enemy will wield against him?

Dukes Are Forever is the explosive conclusion to Bec McMaster’s London Steampunk: The Blue Blood Conspiracy series and brings this incredible saga to an end in what can only be described as a blazing and deeply sensual meeting of two formable minds as the Duke of Malloryn meets his match in the woman he least expects; his wife.

The Duke of Malloryn and his Company of Rogues are preparing for the final showdown with the Lord Balfour. Yet even as he approaches what has been the compilation of years of fighting his enemy, Malloryn finds his mind drawn to the last thing he wants to be thinking about; his wife. After a compromising situation forced them into marriage, Malloryn was sure Adele had a heart of ice, but recent events have left him with turbulent feelings towards her and when a series of incriminating photos surface of her kissing another man, Malloryn sets out to determine if she has been playing him all along---even if he has to seduce her in order to find out. Adele Hamilton may have tricked her husband into a loveless marriage in order to protect herself but that doesn’t stop her for wishing for more. After years as prey to the Echlorn lords who took what they wanted from her regardless of her consent, Adele knows she is finally safe even as Malloryn remains cold and distant. She knows he sees her as heartless but when he suddenly approaches her with seduction in mind, Adele lets herself imagine a future without a cold marriage bed and a husband who could love her. He’d sworn he’d never love again after what Lord Balfour took from him but Malloryn can’t deny his lady wife knows how to get under his skin. He plans to lure her into revealing her secrets but as they give into the passions between them he’s soon left wondering exactly whom is seducing whom....

Reading Dukes Are Forever was such a bittersweet experience. I was so excited to read Malloryn and Adele’s story but also somewhat sad as I knew it would be the last novel. Bec McMaster has truly entranced me with this series and its predecessor series since the moment I began reading the very first novel Kiss of Steel.

As with all the other instalments, Dukes Are Forever features scorching sex scenes, but the brilliance of this series is that it is so much more than a sexually charged adventure. There is a real storyline with mystery and intrigue woven into each novel. McMaster has written characters who have personality individually but also a fantastic chemistry together. It’s been wonderful seeing all the friendships and familial bonds that have developed and I’ve loved seeing all the characters of past novels continue to be so focal.

Bec McMaster left me entirely besotted with Malloryn and Adele in Dukes Are Forever. Malloryn has always been so controlled that it was wonderful seeing a woman get under his skin so completely. I personally find him so, so sexy but seeing him get all riled up and emotional about a woman only made him more swoon-worthy. There’s something to be said about seeing a rational, intelligent man come undone thanks to the woman he least expects.

And Adele....I think she’s now my favourite female lead in this series! We first met her in Lena’s story as Lena’s best friend and a woman who had a certain reputation within polite society. Given today’s obsession with “slut-shaming” I really appreciate what Bec McMaster did with Adele as a character as I felt it was relevant. Adele was misunderstood in so many ways. She was simply a young woman who was trying to protect herself—and her younger sister—from the vicious Elchon lords who preyed on them for their blood. Adele was actually a real sweetheart who had never been loved or appreciated. Intelligent but fiercely underestimated, Adele wasn’t afraid to say what was on her mind; something that made her a perfect match for Malloryn.

The relationship between Malloryn and Adele was simply scorching to read about. Bec McMaster could not have gotten the banter, simmering tension and sexual chemistry any better between them. The push and pull, the way they drove each other mad and kept each other on their toes—so addictive to read about. I devoured the stolen kisses and carnal explorations McMaster wrote between them. As an innocent, Adele came alive in the arms of her husband as he taught her about passion and it was very sexy seeing Malloryn bring her inner desires to life. Especially when she learned to turn the tables on him and the shoe was on the other foot.

There was so much to love about this novel. From the moments of humour between the Rogues and their jesting with each other in an easygoing way to the action and danger as they took on Balfour to the burning connection between leads Malloryn and Adele, Dukes Are Forever had it all.

Bec McMaster has quickly become one of my new favourite authors and I will definitely be recommending this series to anyone who will listen as well as rereading them in the future as I want to loose myself in the characters and their world all over again!