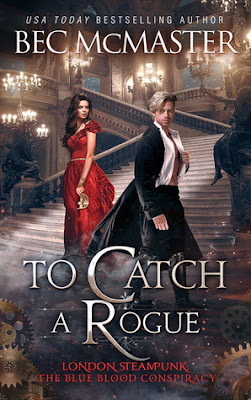 An impossible heist. A thief and a rogue. But will she steal his heart, instead?

The Company of Rogues finally knows the identity of the mastermind behind a plot against the queen—but their enemy is still one step ahead of them. When he kidnaps one of theirs, the Rogues plan a daring rescue mission that will lead them into the heart of the bloodthirsty Crimson Court.

It's a job for a master thief, and there's nothing Charlie Todd likes more than a challenge. To pull off the impossible, Charlie needs a crew, including the only thief who's ever been able to outfox him.

He broke her heart. But now she must risk it all to save his life...

Lark's spent years trying to forget her past, but the one thing she can't ignore is the way a single smile from Charlie still sets her heart on fire. When he proposes they work together again, it feels just like old times, but she has one rule: this is strictly business.

It's Charlie's last chance to prove he can be trusted with her heart. But Lark's keeping a deadly secret. And as passions are stirred and the stakes mount, it might be the kind of secret that could destroy them all...

Ocean's 11 meets Dracula, in this sexy paranormal heist by USA Today Bestselling Author, Bec McMaster. If you like sexy paranormal romances, steampunk shenanigans, and plenty of action-adventure (vampires, dirigible flights, and steamy rooftop chases), then dive into this thrilling heist with Charlie and Lark.

To Catch A Rogue is the fourth novel in Bec McMaster’s London Steampunk: The Blue Blood Conspiracy series and is an enlightening, eventful and utterly enchanting story filled with witty banter, romance and excitement.

Charlie Todd lost his best friend three years ago when a reckless choice cost her the life of the only father she had ever known. Though he has forged a new family for himself in the Company of Rogues, Charlie has never stopped hoping to repair the relationship. Which is why when the leader of the Company of Rogues is kidnapped and the rescue mission requires the best thief out there, Charlie turns to that very special woman. Lark has spent years trying to forget her past but a single smile from Charlie Todd has always had the ability to make her weak in the knees. Their friendship was once the most important thing to her but in the years since the revolution, Lark has fought to overcome the unrequited feelings she has for Charlie. When he approaches her for help in an important mission, Larks first instinct is to say no but when it becomes clear Charlie will embark regardless of her decision Lark finds herself returning to the one place she swore she would never go. Secrets are revealed and hearts are on the line as the two former best friends explore the new passions that burn between them.

Bec McMaster finally offers fans the novel they have been waiting for—the highly anticipated story about Charlie and Lark. I’ve loved Charlie and Lark since they were children in the previous series and I feel as though I have watched them grow up. To Catch A Rogue was the compilation of all the moments of friendship, hilarity and childhood innocence they have shared finally being acted upon as adults. And with fantastic results!

McMaster was always going to need to bring her A-game with To Catch A Rogue as my expectations with this novel were high heading into it. I mean, come on! Its Lark and Charlie. Charlie and Lark. They needed a fantastic story and I think Bec McMaster truly did give them that. It was exciting, riveting, packed with sexual tension and witty banter and full of entertaining moments of passion and romance.

After eight novels set in London, I enjoyed the change of scenery as Bec McMaster takes her dashing series to Russia and into the heart of the Blood Court in To Catch A Rogue. I thought the brief glimpses of the court were highly intriguing and I loved how McMaster ties Larks past in with the Russian aspect. I know the next novel will be the last in this series but I am very much hopeful that we could one day explore this Russian Blue Blood world—I already know what characters I want McMaster to feature!

Lark and Charlie were lovely to follow and I highly enjoyed seeing Charlie persue Lark so completely. They were childhood friends and this foundation of friendship bled into a delectable tension as they explored the real feelings they had for one another. There was a sweet innocence to their romance that mingled with the sexual chemistry they had while an overall feeling of first love encompassed their relationship.

To Catch A Rogue is a fabulous read and leaves me highly excited to begin the fifth and final novel featuring Malloryn and Adele. I have no doubt that Bec McMaster will have an explosive conclusion up her sleeves and I can’t wait!