Book Shelf: Slippers And Thieves (Fairy Tales of the Magicorum #4) by Christina Bauer 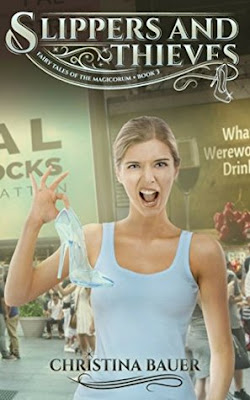 Years ago, Elle—never call her Cinderella—escaped her evil step family in order to build a new life for herself in Manhattan. Today, Elle’s awful past is a distant memory. In fact, Elle even attends West Lake Prep, an exclusive high school where regular humans mix with members of the Magicorum, such as fairies, shifters and witches. Although she still must live in hiding from her evil stepfamily, Elle has always found ways to get whatever her heart desires. That is, until Alec Le Charme.
Alec is the heir to the Le Charme dynasty of high-end jewelers. He’s also kind, charismatic, has a knee-melting smile. Elle has fallen for him, hard. Unfortunately, thanks to Elle’s evil step family, Alec is absolutely off limits. In fact, if Elle and Alec so much as kiss, it will start a magical chain reaction that would end in powerful factions of witches and wizards going to war. As a result, Elle and Alec vow to stay friends, no matter what. Then West Lake Prep holds a masquerade ball. Identities get mixed up and forbidden kisses are finally shared.
Time for the Magicorum to go to war, and for Elle to confront her hidden past in ways she never thought possible.

Slippers And Thieves is the fourth instalment in the Fairy Tales of the Magicorum series by Christina Bauer and is a fun and easy story that finally features Ella and Alec in their long awaited tale!

As a Cinderella template, Ella has put a lot of effort into changing her fate and that includes escaping her evil stepfamily and making a life for herself in Manhattan. She even attends West Lake Prep alongside her best friend Bry, an exclusive school where regular humans mix with fairies, shifters and witches. Although she must live a life in hiding, Elle has always been able to get her heart’s desire……until Alec. Alec Le Charme is the heir to a chain of high-end jewellers and someone who melts Elle’s heart with his charm and kindness. Despite her best intentions, Elle has fallen for Alec, something that is a big no-no thanks to her evil step-mother, who is determined arrange a marriage between Alec and her daughter Ivy. Staying friends with Alec is the best option, but when masquerade balls, mixed identities and secret kisses occur, Elle and Alec will need to decide just how far they’re willing to go to be together and if they can overcome not only all the obstacles in their way, but Elle’s fear of letting someone close as well.

I’ve been a fan of this series since the first instalment was released and even now I continue to be entertained by the tales Christina Bauer creates. Fairy Tales of the Magicorum is a fun and effortless series to read. The idea---that a number of supernatural beings exist (shifters, witches, fairies) and that there are people whose lives mimic the structure of a number of common fairytales (Cinderella, Snow White, Sleeping Beauty etc) is really intriguing. I think it’s a different twist on a fairytale retelling. I mean, the characters know they are living fairytale templates; it was a part of everyday life---this idea is just really fun to me.

After three novels, we finally get to see the story of Elle and Alec! Readers will be familiar with Elle who is Bryar Rose’s best friend and Alec who is Knox’s. The chemistry between them has always been there so I have been [patiently] waiting for the day Christina Bauer finally told their tale and I don’t think she disappoints!

Slippers And Thieves unfolds through Elle and Alec’s varying, back and forth perspective. Part of the novel takes place prior to any of the other events of the series to help set the stage and give readers a better understanding of all that Elle has been through to get where she is. I actually quite liked this aspect, although I was surprised to see that Elle and Alec had actually met before I thought they had.

I really do love both Elle and Alec as characters and think they are both sweet but capable individuals. They had a great chemistry together and were adorable. I enjoyed the fact that even though they were somewhat influenced by their fairytale templates they didn’t let that dictate their decisions and actions. Their feelings were entirely their own.

Slippers And Thieves is full of colourful creatures and characters including mining dwarves, animated objects and talking animals. Romance, adventure and excitement mingle and I can’t wait to see what will happen with Elle and Alec next. Oh and I wouldn’t mind seeing Jacoby feature and brought to his knees by a woman….perhaps by Agatha!