Book Shelf: Navigating the Stars (Sentinels of the Galaxy #1) by Maria V. Snyder 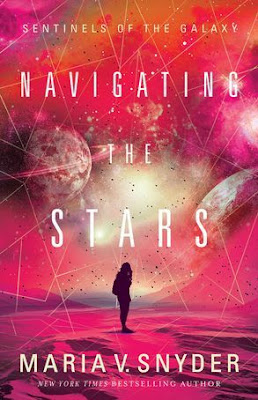 Terra Cotta Warriors have been discovered on other planets in the Milky Way Galaxy. And Lyra Daniels' parents are the archaeological Experts (yes with a capital E) on the Warriors and have dragged her to the various planets to study them despite the time dilation causing havoc with her social life.

When one of the many Warrior planets goes silent, and looters attack her research base, Lyra becomes involved in discovering why the Warriors were placed on these planets. And, more importantly, by who.

Navigating the Stars is the first novel in Maria V. Snyder’s Sentinels of the Galaxy series and is a rich and surprising science fiction YA that draws readers in with its mystery, suspense and promising storyline.

Terracotta Warriors have been discovered on planets all across the Milky Way and Lyra Daniel’s parents are the foremost archaeological experts on them. This means Lyra has been dragged to various planets to study them all her life. Lyra is tired of always loosing friends and of the constant moves, even as her parents promise that the most recent find is the most exciting of them all. Stuck on a research base isn’t Lyra’s idea of fun, but when one of the many Warrior planets go silent and looters storm the base, Lyra quickly finds herself involved in discovering the Warriors true origin but with dangers coming from unexpected places and a blast from the past throwing her through a loop, Lyra will need all her skills to outsmart the bad guys before those she cares about are hurt.

Maria V. Snyder is an author I absolutely love. I’ve been a fan since Poison Study came out as a debut (yes that long) and have devoured her novels ever since, continuously getting lost in her tangible and alluring worlds. Navigating the Stars proved to be something different than her fantasy tales and Snyder doesn’t disappoint with this intergalactic and futuristic adventure.

I really enjoyed the concept of China’s infamous terracotta warriors being discovered throughout space, although at this point the implications and reasons behind their existence is yet to be explained. I have a feeling that Maria V. Snyder has a lot planned where their origin and purpose is concerned and given some of the events of this first instalment, I’m very keen to see what we uncover as the series progresses.

Navigating the Stars is told through the eyes of Lyra, a talented hacker (called worming in this series) and daughter of the two leading archaeologists on the terracotta warriors. Admittedly the novel does read younger than some of Snyder’s other books and I think this stems from the fact that protagonist Lyra is seventeen years old and still very young in a lot of ways; something that is highlighted in her occasionally childish voice and actions throughout the story. Lyra is rash and often unthinking however I do see a lot of area for potential growth in her and can only envision the kind of character she will become throughout the series.

Maria V. Snyder weaves elements of action and romance within her story while also focusing on the mystery and unknown surrounding the terracotta warriors. Her ideas behind space travel and time jumps was interesting if not somewhat confusing in the beginning. I felt the story got off to a somewhat slow start in the very beginning but steadily progressed with the turn of each page.

Building towards some surprising revelations that leave more questions to be answered, Navigating the Stars features likable characters and an intriguing storyline. Maria V. Snyder concludes this chapter of the series very well and has me excited to see what she has in store for her characters and her readers with the next novel---I can’t wait to read it!