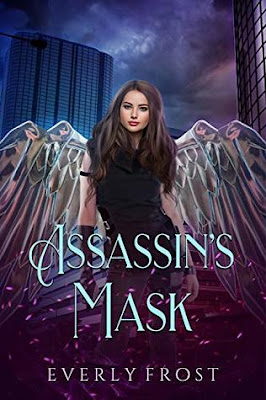 Is love worth fighting for?
When Hunter Cassidy revealed her true power to Slade Baines during a fight for their lives, everything she wanted was ripped away from her.

Now, with her heart in pieces, Hunter is left only with her determination to find and destroy the deadly weapon that led her to infiltrate the Assassin's Legion in the first place.

But Hunter's quest proves more complicated than she expected, leaving her with no choice but to make a deal with one of the Legion's most formidable assassins—a deal that catapults her right back into Slade's life.

Now the Master Assassin, Slade's power grows by the day and so does his determination to fight the bond he formed with Hunter and the powerful attraction that keeps drawing them together. No matter what, he will protect her from the enemies she makes at every turn, including the new leader of the underground whose mission is to destroy them both.

When tragedy strikes, Hunter discovers that the weapon she sought is nothing like she expected. She and Slade will need to work together to defeat the rising power behind the underground. But can they fight together when their hearts are torn apart?

Assassin’s Mask is the second novel in the Assassin’s Magic series by Everly Frost is a fantastic sequel and continuation in the saga that is full of danger, exhilarating romance and edge of your seat excitement.

When Hunter Cassidy revealed the truth of what she is to Slade Baines during a battle for their lives, everything she treasured was ripped away. Now with a broken heart, Hunter is left with only her mission to locate and destroy the weapon that led her to infiltrate the Assassin’s Legion to begin with. This is easier said than done and Hunter will have to make deals with fellow assassins if she wants to succeed; something that will put her straight back into Slade’s path. Now Master Assassin, Slade’s power grows day by day, as does his resolve to fight the bond he formed with Hunter---if only for her own good. Then a new enemy surfaces and Hunter and Slade have no choice but to work together if they want to survive. Will their fears keep them apart or will they discover that their greatest strength lies in each other?

I’m seriously in love with this series! After two novels I am very much besotted with the characters and story and am invested in their journey. Well written and paced, Assassin’s Mark continues to explore this rich world of assassins, magic and monsters that Everly Frost has created. With elements of mythology and plenty of solid fight sequences, battles and action, this series has plenty to offer and continues to develop. It’s enchanting and enthralling with a fantastic main character and a great cast of supporting characters whose dynamics I’m loving; Cain, Vlad, Tansy, William, Briar, Dean---they’re all fabulous!

Everly Frost writes our protagonist Hunter as someone so very likable that I’m hopelessly addicted to her story. Hunter is kind, genuine, honourable and so very kick-ass. She’s not perfect and she’s not infallible, but she tries her hardest to do the right thing and not hurt anyone in the process. Hunter is just a fantastic character that is perfect within the story and in her role.

Oh, and she certainly has a perfect match in Slade Baines who faces a lot of his own struggles in Assassin’s Mask. Everly Frost is a writer after my own heart with absolutely NO love triangle in sight with this series. Hunter and Slade are committed to one another only and regardless of the difficulties they are facing there is no denying their chemistry and feelings for one another.

As Assassin’s Mask ends with some shocks, and some losses, I cannot wait to see what happens to Hunter, Slade and all their friends next and will be diving straight into the next book to find out!