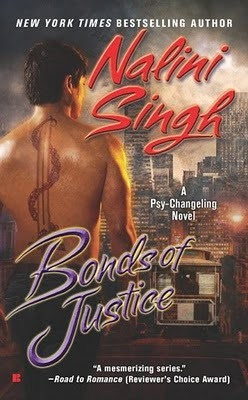 Max Shannon is a good cop, one of the best in New York Enforcement. Born with a natural shield that protects him against Psy mental invasions, he knows he has little chance of advancement within the Psy-dominated power structure. The last case he expects to be assigned is that of a murderer targeting a Psy Councilor’s closest advisors. And the last woman he expects to compel him in the most sensual of ways is a Psy on the verge of a catastrophic mental fracture…

Sophia Russo is a Justice-Psy, cursed with the ability to retrieve memories from men and women so twisted even veteran cops keep their distance. Appointed as Max’s liaison with the Psy, she finds herself fascinated by this human, her frozen heart threatening to thaw with forbidden emotion. But, her mind filled with other people’s nightmares, other people’s evil, she’s standing on the border between sanity and a silken darkness that urges her to take justice into her own hands, to become judge, jury…and executioner…

Bonds of Justice is another sensational Psy-Changeling novel, drawing readers into the eighth instalment in Nalini Singh’s brilliantly told, depicted and explored series!

Detective Max Shannon has always had a natural shield against the Psy, an ability that has both helped and hindered his career in law enforcement. A determined individual, Max is left reeling when his latest case sees him paired up with a Psy who temps the most sensual side of him. Sophia Russo is a Justice-Psy with the ability to delve into people’s minds and retrieve memories. Struggling to maintain the shields that prevent her from descending into madness as a result of her abilities, Sophia is a scarred and fractured individual who has managed to project a calm façade for years. That is until she is partnered with Max to investigate a string of Psy deaths connected to Councillor Nikita Duncan. Max ignites wants and desires Sophia has never before felt even as she stands on the cliffs edge of a decent into madness. Feeling emotion like never before as her shields slowly but surely fail, only a miracle can prevent Sophia from losing her mind forever………

Wow! I really, really enjoyed Bonds of Justice! This book utterly swept me up and into Max and Sophia’s story; captivating me with the turn of every page. Nalini Singh presents an addictive read with Bonds of Justice that sees two fantastic characters fall for one another as they hunt for a killer.

I very much liked our two leads in this book, Max and Sophia. Max Shannon is a tough as nails cop who I’m not gonna lie—in a lot of ways reminds me of Butch from J.R. Ward’s Black Dagger Brotherhood. That isn’t necessary a bad thing as I love them both! Sophia on the other hand was actually a very scarred Psy; someone whose connection with Silence has never been as strong as others of her race and whose shields are slowly letting her down.

Personally Sophia won me over as one of my fave female leads in this series. I loved her personality; she was the perfect blend of inner strength and vulnerability and I thought her and Max really worked together. These two are actually lighter personalities than some of the other characters we’ve met, especially considering that Max doesn’t share the dominant and possessive tendencies many of our male Changeling leads have in the past. That doesn’t mean he isn’t very protective and appreciative of Sophia, because he is, it’s just in a more human manner.

As always Nalini Singh wins me over with her romance. Max and Sophia share a wonderful attraction to each other, which builds beautifully and develops over the course of time they work together. Sophia really embraces what she feels for Max once she realizes how powerful her feelings are, and Max never really shies away from the fact he wants her. Sophia’s physical and mental struggles with touch make their relationship interesting as we as the reader see them journey to a point where they were able to be physical without any pain on Sophia’s part.

I’m still in love with each and every character in this series but someone I’m really beginning to see in a new light is Nikita Duncan. I really believe she could be a dark horse here. With every novel and involvement in the series, Nikita becomes a bit more complex and complicated. I’m honestly beginning to believe that what we’ve seen of Nikita so far is just a façade she wears and the Nikita that lurks below the surface not what we’ve seen at all. And I love that! Nalini Singh has me oh so eager to get to know Nikita—I hope maybe she’ll have her own story down the track.

Rich, romantic and exciting, Bonds of Justice is another deeply sensual novel by Nalini Singh that does not disappoint. Satisfied with how this novel ended I’m ready to jump into the next one!