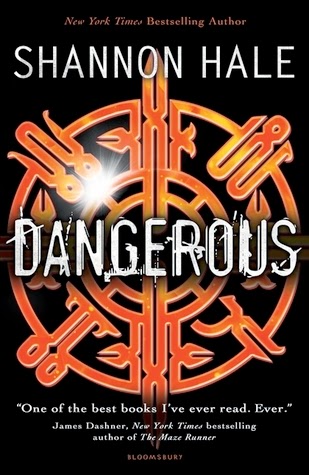 Maisie ‘Danger’ Brown needs excitement. When she wins a harmless-sounding competition to go to astronaut boot camp, that’s exactly what she gets . . . But she never imagined it would feature stumbling into a terrifying plot that kills her friends and might just kill her too. Now there’s no going back. Maisie has to live by her middle name if she wants to survive – and she’ll need to be equally courageous to untangle the romance in her life too. A clever, suspenseful thriller-adventure by New York Times bestselling author and master storyteller Shannon Hale.

Dangerous by Shannon Hale is an action packed and fast moving tale of shocking discoveries, deadly relics and superhuman abilities. Weaving together fast paced action with romance and adventure, Dangerous is an exciting tale.

Dangerous was an unexpected read for me. Heading into it I wasn't sure what to expect. Though I knew Shannon Hale is well known for her writing, the description for Dangerous didn't give away too much and in the beginning there isn't a lot revealed to enlighten the reader. Spanning the course of a year, Dangerous follows Maisie "Danger" Brown, an intelligent and science loving teenager who wins a competition to attend an astronaut boot camp, with events soon taking a sinister turn when what seems like the adventure of a lifetime begins to unravel.

I was very addicted to the first half of this book. Though it wasn't as fast paced as the second half, the beginning chapters of this book really intrigued me. I was capitated by Maisie's adventures at "astronaut boot camp" and the simplicity of the situations the teens found themselves in appealed to me. Hale's writing was simple but flowed nicely and the introduction of different characters seemed promising. And then the tokens were discovered and where the book should have sucked me in completely....I found my mind wandering. I didn't like the second half of the book as much as I did the first. It was still easy enough to read but I felt the book went downhill from about half way and this was a disappointment for me.

Personally, I really liked Maisie and think Hale did a fantastic job with her as a character! Born with a physical disability in the form of a missing limb, Maisie never lets the loss of her arm effect her. Though she's vulnerable to the cruelty of other teenagers, Maisie is quite stong willed and very stubborn. She's a normal teenager with a best friend Luther and a mum and dad who adore her and has hopes and dreams for the future that include voyaging into outer space. Maisie is extremely likable and was a good heroine to follow.

Though I had minor issues with the book, I think Hale did a good job weaving together the sci-fi elements of the story amongst the characters. I liked the supporting characters Maisie met including Wilder and Dr. Howell and even Dragon. The issues Maisie had with Wilder during the book did my head in though. I appreciated the effort Hale made to keep us on our toes over the motives and intentions of those in the story, but Maisie's constant questioning over Wilder was a disappointment to me. Granted he deserved it, but I was disappointed to see what was a very sweet and endearing romance unravel for a time being.

Filled with surprising twists and story developments, Dangerous ends well and will be perfect for fans who love superheroes and enjoy being kept on their toes!

Source: Sent for review by Bloomsbury (Thank you Sonia!)
Format: Paperback
Buy it: Bookworld | The Nile | The Book Depository | Amazon
My Recommendation: If you like something unique with different elements woven together, then this is right up your alley!
Cover: Simple, but okay.
Will I read sequel/continue with series: I haven't heard about a sequel in the works, but if there is I'll be reading it......