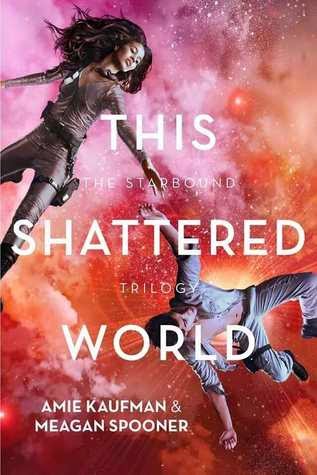 The second installment in the epic Starbound trilogy introduces a new pair of star-crossed lovers on two sides of a bloody war.

Jubilee Chase and Flynn Cormac should never have met.

Lee is captain of the forces sent to Avon to crush the terraformed planet's rebellious colonists, but she has her own reasons for hating the insurgents.

Rebellion is in Flynn's blood. Terraforming corporations make their fortune by recruiting colonists to make the inhospitable planets livable, with the promise of a better life for their children. But they never fulfilled their promise on Avon, and decades later, Flynn is leading the rebellion.

Desperate for any advantage in a bloody and unrelentingly war, Flynn does the only thing that makes sense when he and Lee cross paths: he returns to base with her as prisoner. But as his fellow rebels prepare to execute this tough-talking girl with nerves of steel, Flynn makes another choice that will change him forever. He and Lee escape the rebel base together, caught between two sides of a senseless war.

This Shattered World is the companion novel to These Broken Stars and is the second novel in Aime Kaufman and Meagan Spooner’s Starbound Trilogy and is another beautifully written and detailed story of romance, danger and the powers of love and truth set amongst a futuristic backdrop.

Having been deeply impressed with this first novel in this trilogy, I was pleasantly surprised to discover that This Shattered World was a wonderful follow up. Authors Aime Kaufman and Meagan Spooner introduce readers to two new characters and explores a new aspect of their world.

Told through the eyes of Captain Jubilee "Lee" Chase, a solider and Flynn Cormac, a rebel and resistance fighter who live on the planet of Avalon, This Shattered World sees the two collide when a chance encounter results in Flynn taking Jubilee captive before they discover that something sinister is at foot on their planet and the war that has raged between their two sides for decades may not be a clean cut as either believes it to be….

Even though I fell in love with Lilac and Tarver during the first book and was sorry to see our time with them come to an end, I was very satisfied with Jubilee and Flynn as our new main characters in this installment. Jubilee is a very strong young woman and although she is a solider; well trained, alert and methodical, she also has a heart---although there are those who would dispute this. Flynn on the other hand is softer and wants only peace. He’s willing to fight for what he wants, even if he has to make hard choices along the way.

I liked the growth I saw in both Jubilee and Flynn during the story. Jubilee learns to feel again and comes to care about something real, while Flynn has his eyes opened to the world around him. I liked that the authors drew two people from opposing sides together and gave them a common want and goal. They found themselves against the world and it was very interesting seeing their reactions when they only had each other to rely on.

Throughout the novel there is an underlying tone of romance to the story. As Jubilee and Flynn get to know each other and an alliance and friendship blossoms, they bond and the mutual attraction they feel develops into something very sweet. They’re very much attracted to each other and they have a simple chemistry that has you as the reader eager to see them in situations where they’re acting on what they feel, but I felt like I appreciated the softness to their romance. It wasn’t in your face or too much, but rather a nice undertone to an action packed story.

As the second novel in a trilogy featuring a different couple and storyline, This Shattered World was very well told. We’re treated to Tarver Merendsen making an appearance in the story for a little while and even Lilac has a brief cameo that just prove how adorable they are as a couple.

Deliciously told and wonderfully written, This Shattered World is a worthy sequel to its predecessor and leaves me raring for the third and final book in the trilogy!

Source: Sent for review to Allen & Unwin (Thank you Clare!)
Format: Paperback
Buy it: Bookworld | The Nile | The Book Depository | Amazon
My Recommendation: Love a great sci-fi or dystopian? This series is PERFECT for you!
Cover: I think it's beautiful and goes wonderfully with the first....
Will I read sequel/continue with series: YES!