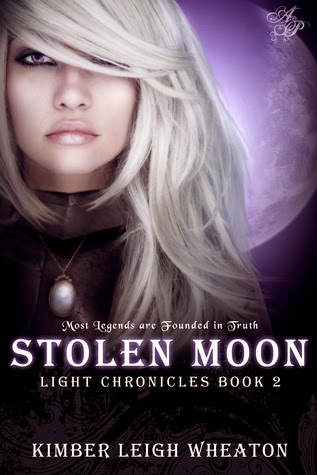 Katarina ~ a Royal Knight bound by honor and duty who steals a powerful relic from a sorcerer in a desperate attempt to save her kingdom from the clutches of a madman.

Ethan ~ a mercenary leader trapped between his growing attraction to Katarina and his responsibility to protect his friends from the evil pursuing her.

Zebulon ~ a malicious sorcerer waging war as though it's a game, caring nothing for the lives he destroys in his quest for power.

Drawn together by a moonstone medallion—an indestructible relic with immense magical power.

Katarina steals the medallion from Zebulon and flees in the dead of night. Together with Ethan and his mercenaries, she struggles to stay one step ahead of the sorcerer and his minions in a race against time to save her homeland. Fierce battles, ravenous monsters, and bloodthirsty brigands—those are no surprise. But Katarina never dreamed her greatest obstacle could be falling in love.

Stolen Moon is the follow up companion novel to Kimber Leigh Wheaton’s amazing debut Shadow Fire and once again draws readers into a magical land of danger and romance as we meet another kick-ass heroine on a new perilous journey!

I really loved Kimber Leigh Wheaton’s debut Shadow Fire and was thrilled to discover Stolen Moon to be a great follow up. I didn’t love it quite as much as the first book, but it got really close. Well written and exciting, Stolen Moon featured a capable heroine, friendship and tones of romance—just how I like my novels!

Told through the eyes of Katarina, a Royal Knight who has just fled from the clutches of an evil sorcerer named Zebulon, Stolen Moon sees Katarina travel vast lands and dangerous domains with a bunch of mercenaries in order to return a medallion she had taken from the sorcerer in her escape to its rightful resting place. Meeting new people and making new friends, Katarina discovers unexpected secrets about herself and what she is capable of; falling in love along the way as she heads towards a final battle with Zebulon that will finally set her people free.

As the main character, Katarina was great to follow. She was intelligent and capable; able to hold her own in a world dominated by male fighters. Admittedly she was a bit too emotional at times, but considering the losses she experienced and how much she was going through, I’ll forgive her the frequent crying.

Katarina finds romance and love in the arms of Ethan, the cheeky mercenary who steals her heart in Stolen Moon. Fans of the first book may remember Ethan from Shadow Fire when then heroine Ashlyn and her comrades rescued him from the clutches of different evil sorcerer. In Stolen Moon, which is set four years after Shadow Fire, Ethan is a lot older and very much the alluring and sensual stranger who captures Katarina’s attention before her heart.

Katarina and Ethan are very sweet together and Wheaton does not disappoint with a lot of romance in Stolen Moon. Their relationship moves quickly but readers will still believe their attraction and romance as the chemistry between them is prominent and leads a lot to connecting them quickly.

I very much enjoyed the other characters in the story too. It was lovely to see Ashlyn, Zane and Tamaris reappear, if only for a brief moment and I enjoyed seeing Loki, Ethan and Caleb feature in the story. Wheaton introduces readers to a great team of mercenaries including, Vale, Bronwyn and Forde who had flavor to the story and features Caleb too, someone who was rescued with Ethan in the last book, but whom we barely got to meet. I found Caleb to be a real sweetie as a powerful mage who is a part of Ethan’s group, and considering his history and abilities, I would personally love to see a story feature him in the future too if possible.

Filled with romance, danger and adventure, Stolen Moon was a fun fantasy tale that will easy entertain and satisfy! I can only hope Kimber Leigh Wheaton decides to write a third novel!