Book Shelf: Kiss of a Demon King (Immortals After Dark #7) by Kresley Cole 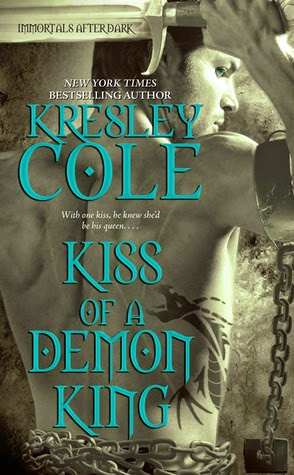 From New York Times bestselling author Kresley Cole comes this spellbinding story of a demon king trapped by an enchantress for her wanton purposes -- and the scorching aftermath that follows when he turns the tables and claims her as his captive.

HIS OBSESSION...
Sabine, Sorceress of Illusions: the evil beauty who surrenders her body, but not her heart.

HER DOWNFALL...
Rydstrom Woede: the ruthless warrior who vows to keep her at all costs.

THEY WERE NEVER SUPPOSED TO WANT EACH OTHER THIS MUCH...
With each smoldering encounter, their shared hunger only increases. If they can defeat the sinister enemy that stands between them, will Sabine make the ultimate sacrifice for her demon? Or will the proud king lay down his crown and arms to save his sorceress?

Kiss of a Demon King is the 7th Immortals After Dark book and is yet another sizzling tale brimming with sexual tension, romance and danger!

I have to say, after the last book I was really looking forward to reading this book. The moments we saw Sabine and Rydstrom together certainly made you wonder exactly what was happening between the two of them and where they were at. They seemed like enemies, and I have to say, seeing this side of their story though their eyes changed some of the moments of the last book for me--and I love Cole for doing that!

As individuals, I really liked Sabine and Rystrom. Sabine was nothing I expected her to be and for that I was really glad. Cole managed to create a really devilish female, who should by all rights be evil....and yet she wasn't. She was sassy and vain and proud, but also kind. I loved how Sabine was with the little demon Puck. It was a highlight of the book for me and absolutely hilarious in a really sweet way.

Rystrom was a very sexy male and very likable in this book. There's not much to say about him other than I think he was a great hero and match for Sabine.

The relationship between Rydstrom and Sabine was really intense. Sometimes you didn't know what they were to each other--they were ultimately enemies who wanted each other and seeing them fight for dominance over the other; unable to deny their attraction and deepening feelings was really entertaining to read about. I never knew where they would go next.

With another great book coming to a perfect ending, I'm off to begin the next one!

Source: I bought
Format: Paperback
Buy it: Bookworld | The Nile | The Book Depository | Amazon
My Recommendation: A brilliant PNR series!
Cover: Another stunning and sexy cover!
Will I read sequel/continue with series: Yes.....