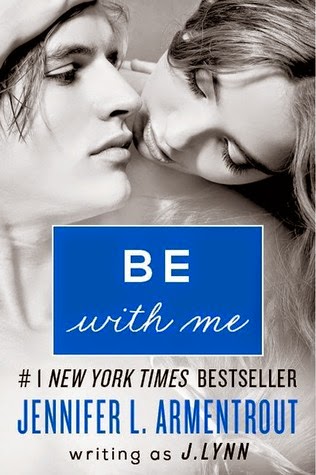 Teresa Hamilton is having a rough year—she’s in love with her big brother’s best friend, but he hasn’t spoken to her since they shared a truly amazing, mind-blowing, change-your-life kiss. She got out of a terrible relationship. And now an injury is threatening to end her dance career for good. It’s time for Plan B – college. And maybe a chance to convince Jase that what they have together is real.

Jase Winstead has a huge secret that he’s not telling anyone. Especially not his best friend’s incredibly beautiful sister. Even though he and Teresa shared the hottest kiss of his life, he knows that his responsibilities must take priority. He certainly doesn’t have time for a relationship. But it doesn’t help that all he can think about kissing the one girl who could ruin everything for him.

Be With Me by Jennifer L. Armentrout, writing as J. Lynn, is the deliciously written and addictively told second full installment in Armentrout’s Wait For You series and this time follows characters Teresa and Jase as they finally give in to the passion and connection that simmers between them in this sensual read that is sure to thrill!

Having been previously introduced to Teresa Hamilton in the first book of this series, Cam’s little sister is now front and center as the protagonist and leading lady in Be With Me. It’s in this book that Tess finally finds herself acting on the years long crush she’s had on her brothers best friend Jase Winstead, a beguiling man who happens to harbor life-changing secrets.

Be With Me was an intensely addictive read. Armentrout details the story perfectly; her writing is precise, but telling and the story was over flowing with sexual tension and chemistry. Plenty of revelations kept me on my toes and the events the accompany Tess and Jase's romance made for quite the interesting read!

I was delighted to follow Tess in this book. After getting to meet her briefly in Wait For You and Trust in Me, there was no doubt that Tess had her own tale to tell and the hints and possibilities Armentrout set up with Jase in those two stories promised a sensual story featuring the two of them. Tess really goes through a lot in Be With Me; seeing her dreams end and having her heart constantly messed with, but she handles herself quite well. It really was impossible not to like her; she was just a good, honest character and made it easy to follow the story.

Jase on the other hand, proved to a real difficulty at times, both for Tess and me as the reader. Don't get me wrong, I love this guy, but boy does he know how to put someone through the wringer. Jase has been through a lot, and continues to go through a lot as we quickly come to understand the difficult situation he is in. Not to give away any spoilers, but Jase doesn't love easily, and who can blame him with the history he has. That being said, sometimes I just wanted to shake him and demand to know what the hell he was doing!

Oh, I completely understand why he acted as he did at times, but that didn't make it any less frustrating to see. Here's a guy worthy of love and yet who keeps sabotaging his own happiness because of fear. Jennifer L. Armentrout certainly knows how to make the reader sweat and that becomes so incredibly evident with the beguiling but at times frustrating character that is Jase Winstead.

Despite their own baggage, Tess and Jase really are perfect together. She's his best friends little sister and there's that forbidden aspect that always shines through, but the chemistry that Armentrout wrote into their relationship is addictive all on it's own. These two sizzle up the pages and the slow build as their relationship builds and becomes more and more physical is perfect!

Now having read Tess and Jase's story, I'm already ready for the next book. At this point in time I have a list of characters whose stories I'm ready to read including Brit and Ollie, Calla and maybe Brendan. Even Steph is someone who I'm sure has her own story to tell!

Sensual, addictive and hot as hell, Be With Me is an amazing NA read. Fans of Abbi Glines won't want to miss this series as Jennifer L. Armentrout continues to dish out romantic, beguiling stories that will thrill from the very beginning!

Source: I bought
Format: Paperback
Buy it: Bookworld | The Nile | The Book Depository | Amazon
My Recommendation: A MUST READ NA series!
Cover: Fits perfectly with the others in the series so far.
Will I read sequel/continue with series: YES!

Email ThisBlogThis!Share to TwitterShare to FacebookShare to Pinterest
Labels: Book Shelf, I Bought