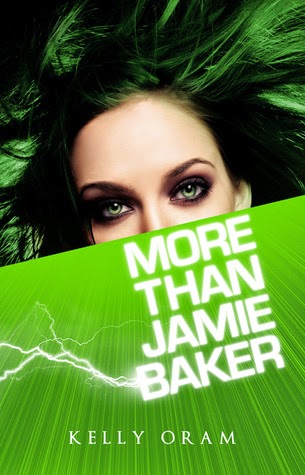 Jamie Baker, the only girl in the world with superpowers, has now accepted who she is and learned to control her power. Not to mention she has the best boyfriend on the planet. Life is finally looking good. But the day she witnesses an accident and decides not to save the guy out of fear of being exposed, she realizes that simply being Jamie Baker isn't enough.
After seeing Jamie so wrecked with guilt, the ever-helpful Ryan Miller decides it's time to make all of his fantasies about turning his girlfriend into an honest-to-goodness superhero become a reality.

Of course, coming up with a decent Super Name and fending off all of Ryan's attempts to get her into spandex aren't the only problems Jamie faces. The more her alter ego starts to make headlines, the harder it becomes for Jamie to hide her extracurricular activities from her best friend, the government, radical scientists, and the mysterious new guy who is determined to steal her from her boyfriend.

Jamie's back and she's better than ever! After the perfect ending of Being Jamie Baker I must admit I wasn't a hundred perfect sure what kind of storyline to expect from it's sequel. I was definitely excited to read more of Jamie and Ryan and I was certain Kelly Oram would have some kind of excellent storyline planned, but I have to say More Than Jamie Baker was even more exciting than I was expecting. It certainly gave the first book a run for it's money in the danger and high stakes department!

With Jamie and Ryan now in collage and having been together for more than a year, I'm really thrilled with how this series is progressing. Oram is steadily building on her base plotline, introducing new characters and new dangers with plenty of twists and developments you won't see coming!

Jamie is still the feisty, electric (pun totally intended!) and kick-ass character she was in the first book, however now she is entirely comfortable in her own skin and is in complete control of her powers thanks to the extensive practice Ryan has put her through. Now in collage, Jamie has formed a strong and powerful friendship with Becky since the conclusion of the first book and is still deliriously in love with Ryan. She's very happy and content for the first time in a long time, until a tragic accident she chooses not to prevent forces her to re-think keeping her abilities a secret and now helping people.

Honestly, I just adore Jamie. She's extremely intelligent and sassy and I just love her attitude. She's really feisty, and her sarcastic nature make for some awesome one-liners throughout the novel. Jamie has really grown a lot since we first met her in Being Jamie Baker and has only become a better character and person since then. I still love how deeply she loves her family and Ryan and must commend her for some of the hard choices she made in this book--even if she broke my heart making them!

Ryan is still his ever dedicated self and is still completely devoted to Jamie. He adores her as much as she adores him and continues to support her every step of the way. I just love Ryan--he brings so much joy to the book. He and Jamie are just perfect for each other and I love reading how committed they are to each other. Oram throws some interesting hurdles in for their relationship in More Than Jamie Baker; some of which seem to be resolved, but others not.

New characters change the course of the series, and as Jamie's life is turned upside down by those who want to catch and experiment on her, Kelly Oram writes in some shocking developments. The final few chapters will quite literally leave you holding your breath and the ending is completely out of this world! I guarantee that this cliffhanger will leave you shocked out of your skin and praying that there must be more.

Featuring all the Jamie Baker flair you've come to expect from well, Jamie Baker and with romance woven together with danger and kick-butt superheroes, More Than Jamie Baker will have you on the edge of your seat and gob-smacked over the cliffhanger ending that leaves this reader desperate for more!

Source: Sent for review by author (Thank you Kelly!)
Format: Kindle ebook
Buy it:  The Book Depository | Amazon | Barnes & Noble
My Recommendation: Love fun supernatural tales with a superhero twist? You'll love this series!
Cover: As awesome as the first one :)
Will I read sequel/continue with series: YES!