Today the Book Blitz for A Breed Apart: The Token by Natasha Rogue stops by The Rest Is Still Unwritten thanks to Xpresso Book Tours. 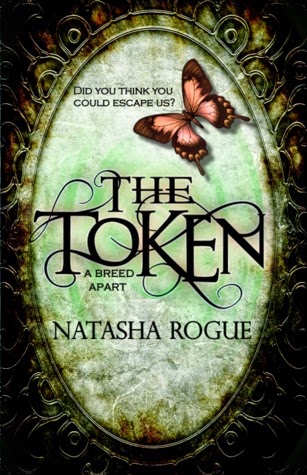 Callie Michaels isn’t pretty or popular, but her singing more than makes up for all she lacks. And as long as she focuses on what’s really important, she can survive high school. But how can she focus with all the drama? Between her best friend’s odd issues and a daily dose of weirdness from the social elite, she’s starting to wonder if she’s the only normal one around.

Just as her life begins spiraling out of control, the answer comes to her in a dream. In exchange for a token of blood, a demon will give her everything she desires. She says “yes.” From that point on, she finds herself changing, becoming something far from normal. Something dangerous.

No one is what they seem—least of all her. While the supernatural creatures around her struggle to maintain their humanity, Callie slowly loses hers. She doesn’t even know what’s important anymore. Friendship, the future, love? And is there anyone who can make her care?

Before I made it two steps, James was out of the car. He slid across the hood and swept me off my feet. The sliding didn't stop there. Solid on his feet as he usually was, James underestimated the slickness of the snow. He fell on his back with a loud grunt. I landed softly on my side, with his stomach to cushion my fall. My elbow in his gut drew another grunt from him.

Dropping his head back into the snow, James held up his hands. "Okay, I give. No more corny lines."

"You'll save them for the other girls?" Hands pressed to his chest, I held myself up so I could look down at him. "What other girls?" He arched up and pressed his lips to mine, just a soft pressure, a gentle massage on my bottom lip, and a little brush of his tongue on the crease, giving me just a hint of his sweet taste. Not the consuming, addictive taste of Nick's kisses. This was something welcome, still burning with the risk of being overwhelming, but a risk I was willing to take. A risk I wasn't taking alone.

Still, the kiss had crossed a line that we'd skimmed along before. I liked it, but it would take some getting used to. There was also the fact that James was trying so hard to be smooth. I decided to point it out. "That was a line."

The snow melted though the material of my jogging pants as I slid back on my knees and tried to stand. James sat up and held my hand until I was firmly on my feet. Not letting go of my hand, he stood beside me, swiped the sleeve of his jacket over the hood of his car, picked me up, and set me down on the edge. Hands braced on the car at either side of my hips he leaned his forehead against mine. "That was not a line. Not that it matters. You're not going to believe a thing I say, are you?"

"Things are real easy to say." I reached up and toyed with the zipper of his jacket, sure it was about to get awkward between us.

James caught my hand. "We don't have to say anything then."

Want more? Be sure to get your copy today!

Natasha Rogue is a Canadian author who's been writing for most of her life. After penning novels behind math textbooks all through high school, she attended Dawson College in Creative Arts with dreams of becoming a screenwriter. The best teacher she ever had took her aside and told her to go back where she belonged. To her roots with the books she loved to write.

Eternal Neverland (Steps Before the Fall) was one of her first complete novels. There are seven books in draft form completed in the series, but they gathered dust until experience and contacts with the right editors and crit partners gave them what they needed to be shared. However, A Breed Apart: The Token, was released through a small press in 2012. The book will be rereleased shortly.

You may find Natasha at several signings throughout the year as she writes multiple genres. Don't worry, she doesn't bite. But she will happily chat with you about the hotties who do. And shamelessly admit to liking Charlie way more than she should.

As part of the tour I have one (1) ecopy of Natasha Rogue's first novel Eternal Neverland: Steps Before The Fall thanks to the author and Xpresso Book Tours.

To enter simply comment on this post with a way to contact you and which format you would prefer. Giveaway ends on December 28th with the winner contacted and announced on this post afterwards. Open internationally!

WINNER:
erma Hurtt--congrats!
Posted by Rachel at 12:00 AM