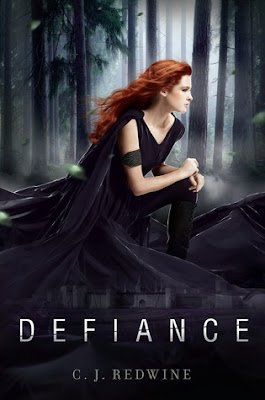 Defiance by C.J. Redwine
Releases on: August 28th
Add it: On Goodreads.

Within the walls of Baalboden, beneath the shadow of the city’s brutal leader, Rachel Adams has a secret. While other girls sew dresses, host dinner parties, and obey their male Protectors, Rachel knows how to survive in the wilderness and deftly wield a sword. When her father, Jared, fails to return from a courier mission and is declared dead, the Commander assigns Rachel a new Protector, her father’s apprentice, Logan—the same boy Rachel declared her love for two years ago, and the same boy who handed her heart right back to her. Left with nothing but fierce belief in her father’s survival, Rachel decides to escape and find him herself. But treason against the Commander carries a heavy price, and what awaits her in the Wasteland could destroy her.

At nineteen, Logan McEntire is many things. Orphan. Outcast. Inventor. As apprentice to the city’s top courier, Logan is focused on learning his trade so he can escape the tyranny of Baalboden. But his plan never included being responsible for his mentor’s impulsive daughter. Logan is determined to protect her, but when his escape plan goes wrong and Rachel pays the price, he realizes he has more at stake than disappointing Jared.

As Rachel and Logan battle their way through the Wasteland, stalked by a monster that can’t be killed and an army of assassins out for blood, they discover romance, heartbreak, and a truth that will incite a war decades in the making.


Thoughts:
First off I wanna be a little vain and say....How. Incredible. Is. That. Cover?!? It's beautiful. Reminds me a bit of Angelfire by Courtney Allison Moulton, but this one is more stunning. And the story *drools*. Alright so the heroine is named Rachel--we know she's gonna rock (;P) and the storyline just sounds epic. Need I mention that I've always loved the name Logan! Seriously. It's like I'm in heaven already! Need. Need. Neeeeeddd! I CANNOT WAIT FOR THIS!!!!

Don't you love the sound of this??
What are you waiting on this week? Let me know!