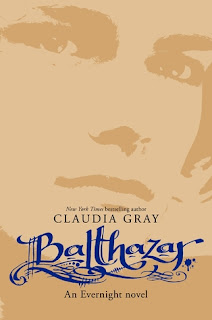 Haunted by memories from his first days as a vampire, Balthazar has spent hundreds of years alone—without allies, without love. When he emerges from his isolation to help Skye Tierney, a human girl who once attended Evernight Academy, Balthazar has no idea how dangerous it will be. Skye’s psychic powers have caught the attention of Redgrave, the cruel master vampire responsible for murdering Balthazar and his family four centuries ago. Having learned of Skye’s powers and the remarkable effect her blood has on vampires, he plans to use her for his own evil purposes. As they stand together to fight the evil vampire, Balthazar realizes his lonely world could finally be changed by Skye...just as Redgrave realizes that he can destroy Balthazar once and for all by taking her for his own.

In a story filled with forbidden love and dark suspense, one of the most beloved characters in Claudia Gray’s New York Times bestselling Evernight series will captivate readers with his battle to overcome his past and follow his heart.

Balthazar is the book all Evernight fans have been waiting for, and with its enthralling storyline it does not disappoint!

I’m a big fan of Claudia Gray. I’ve read all her books and while some may say vampires are done, I disagree when it comes to this series. The Evernight series never ceases to entertain me and while the storyline in Balthazar is nothing I haven’t seen before, Gray’s darkly gothic writing and beautiful storytelling had me captivated from the very first page.

Finally, finally we have Balthazar’s story. After all the wishing and the waiting, one of the most beloved if not saddest and loneliest characters finally get’s his story. We’ve all wanted this story and I’m pleased to say I’m thrilled with what Claudia Gray did! I’ve always loved Balthazar, but in this book I feel like we see a very different side to him. With the kindness and charm that he showed throughout the Evernight series hiding his true sadness, it’s in his story that we see the real pain he houses and we get to see the real Balthazar. There’s no denying that he’s sexy, with his dark good looks and appeal, but as he’s front and centre in this book, Gray’s ability to sweep us back into the various stages of Balthazar’s past allow us to see him as we’ve never seen him before. It’s almost like he’s a different character, but looking back I can see the hints of his true nature we saw throughout Evernight. And I liked what I saw—it was raw and it was horrible; sadder than I expected but I liked it none the less. He wasn’t so much just the 400 hundred vampire that he was, although there’s no doubt that he accomplished everything a vampire is, but rather a man conflicted and vulnerable at times.

We were first introduced to Skye Tierney in the final Evernight book, Afterlife, and I must say she made an impression on me even back then as a human girl who managed to handle her discovery of vampires with surprising grace and bravery. I liked Skye in this book; she was easy to read about and follower---a worthy love interest for Balthazar. She was brave and had plenty of courage. She was rational, but very normal; reacting as I expected her to. I liked the little bit of fire Skye had at times too; tempting and baiting Balty no matter how hard he tried to resist—it was funny seeing a centuries old vampire so flustered by a mere mortal.

I was both thrilled and a tad disappointed with the relationship between Skye and Balthazar. Thrilled because I loved how Claudia Gray wrote it; Skye and Balthazar were both so comfortable with one another. Their relationship was without a doubt one of attraction yet it was built on the friendship that developed throughout the novel. It was sweet and endearing and passionate and fiery at the same time. From their heated stares and hilariously exchanged texts to their soft conversations and the laughs they shared, Balthazar and Skye had chemistry.....and this is also why I’m a tad disappointed. Balthazar and Skye have attended the same school for two years, why couldn’t they have found each other before now? I understand that writers don’t always plan certain things when they begin a series, but I would have loved to have seen their relationship throughout the entire Evernight series! Still, I’m thrilled to see them find each other now.

With an exciting plot full of danger and excitement that see’s Balthazar face people from his past Balthazar is a fantastic read! A few characters from the Evernight series make cameos and we finally get to see Balthazar get his long deserved happily ever after. I’m feeling satisfied with how this story ended, but there are still a few loose ends left untied if you ask me. I feel like Balthazar finally found the happiness he deserved by the end of this book and am thrilled Claudia Gray allowed us to see it!