Book Shelf: The Cruel Prince (The Folk of the Air #1) by Holly Black 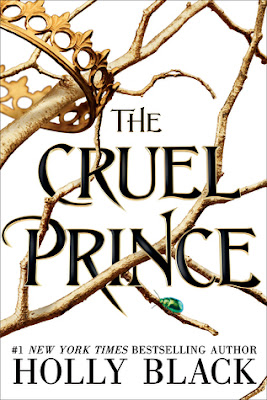 Of course I want to be like them. They’re beautiful as blades forged in some divine fire. They will live forever.

And Cardan is even more beautiful than the rest. I hate him more than all the others. I hate him so much that sometimes when I look at him, I can hardly breathe.

Jude was seven years old when her parents were murdered and she and her two sisters were stolen away to live in the treacherous High Court of Faerie. Ten years later, Jude wants nothing more than to belong there, despite her mortality. But many of the fey despise humans. Especially Prince Cardan, the youngest and wickedest son of the High King.

To win a place at the Court, she must defy him–and face the consequences.

In doing so, she becomes embroiled in palace intrigues and deceptions, discovering her own capacity for bloodshed. But as civil war threatens to drown the Courts of Faerie in violence, Jude will need to risk her life in a dangerous alliance to save her sisters, and Faerie itself.

The Cruel Prince is the highly anticipated latest release by acclaimed author Holly Black and is a darkly beguiling and entrancing read that brings to life a rich and vivid Faerie world full of startling danger, political intrigue and unexpected betrayals.

When Jude was seven years old her parents were murdered and she and her two sisters spirited away to the dangerous High Court of Faerie by their murderer. Having grown up amongst the fey, Jude is now seventeen and eager to earn her place within the treacherous society she lives. Yet some fey despise humans and treat them with cruelty and scorn, including the High King’s third son Cardan who has made it his mission to make Jude miserable. Prince Cardan is merciless and relentless, determined to make Jude concede to him. As the time comes for a new High King to take the throne there are bigger dangers to Jude than the cruel prince. With secrets a plenty, Jude is going to have to determine just how far she’s willing to go to protect those she love, including getting blood on her hands and on her soul…..

As far as I’m concerned, I have no shame in saying that The Cruel Prince was one of the best books I have read for a while; an absolutely brilliant read that easily left me breathless! While I have liked the novels I have read by Holly Black in the past, I haven’t loved them. The Cruel Prince, however, I did love. In fact, I surprised myself by adoring it so much more than I anticipated and am absolutely dying to get my hands on the sequel now.

By far Holly Black’s best book to date, The Cruel Prince was spectacularly written and detailed. The dark, twisted world of Faerie that Black introduces is engrossing while the protagonist Jude is strong and determined; a mortal in a treacherous fey world where people bleed deception and alliances mean nothing. All the different elements complement each other perfectly and made for a thrilling, lyrical tale.

Told through Jude’s intelligent and cunning voice, The Cruel Prince is an intricately woven story. I loved the duplicitous creatures we met throughout the story including all manner of faeries, goblins, redcaps, pixies, nymphs and more. They really brought the story to life and set the vision in my head of this deadly and intricate world. There’s so much dark beauty within this story and Black manages to effortlessly draw you in to this vicious world that is very well written.

I very much enjoy the love-hate relationship developing between Jude and her obvious love interest. The tension between them is heady but subtle and Holly Black has me very excited for all the possibilities that come with their romance in the future. I was entranced by every interaction between them as they fought one another and the way in which the novel ends leaves me sure there is a lot of danger and manipulation to come.

Very impressive from beginning to end, The Cruel Prince sets the standard very high for the novels to follow and leaves me absolutely dying to get my hands on the next novel. Holly Black has created a deliciously dark gem with this tale and I cannot wait for more!

Source: Sent for review by publisher (Thank you guys!)
Publisher: Hot Key Books
Format: Paperback
Australian RRP: $19.99
Release Date: January 2018
Purchase: Bookworld | Booktopia | The Book Depository | Amazon
Final Thoughts: I was very impressed by this book and I can't wait for the sequel to be released so I can delve back into this fascinating world!