Book Shelf: Break Me Like a Promise (Once Upon a Crime Family #2)by Tiffany Schmidt 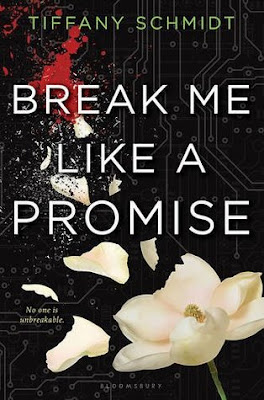 No one is unbreakable.

All Magnolia Vickers has ever wanted was to follow father’s path as head of the Family Business. But new legislation is poised to destroy the Family’s operations in the black-market organ trade and Maggie’s recent behavior has wrecked the business-savvy reputation she’s worked her whole life to build.

She’s given an ultimatum: shape up or step aside.

Then Maggie messes up: she downloads a virus onto her father’s computer, and must sneak it off-estate for repair. When Alex, a tech whiz, uncovers the type of information on the machine, he offers Maggie a choice: her Family can give him a kidney, or he’ll irreparably scramble the data. Maggie agrees, but has no intention of keeping her promise or ever seeing him again. That night Alex shows up at her Family estate with copies of confidential Family files and a shocking revelation—the kidney is for him.

The Vickers aren’t willing to let Alex out of their sight, so he moves onto their estate and Maggie is assigned to be his keeper. A task she resents and he enjoys making as challenging as possible. But procuring black market organs is becoming increasingly difficult, and as Alex’s health declines, she’s surprised to find herself falling for him.

Like it or not, Maggie must accept that if she wants to save Alex’s life and carve out a place in the new legalized organ business, she’s going to have to fight for both.

Break Me Like a Promise is the second novel in Tiffany Schmidt’s Once Upon a Crime Family series and is a delightful companion to the first novel Hold Me Like a Breath that is quite possibly even better than its predecessor.

Magnolia Vickers always had her future mapped out; run the Family business and finally announce to the world she was in love with Carter Landlow. Then Carter was murdered, leaving her a broken shell of who she was and now new legislation to legalise organ donations is threatening to destroy everything her family has ever worked for. Her recent actions have shattered her reputation within the Family, so when Maggie accidently downloads a computer virus onto her father’s computer she seeks outside help to fix the issue hoping to keep it from the Family. Enter tech wiz Alex, the computer programmer recommended to Maggie who takes one look at what's on her father’s hard-drive and offers Maggie an ultimatum; get him a kidney or he’ll destroy what he’s found permanently. The last thing Maggie wants is to give in to her blackmailer, but when Alex turns up at her Family’s estate with the news the kidney is actually for him, Maggie and the Family may have no choice but to help him….lest their hard work be destroyed forever. Maggie is determined to have as little to do with Alex as possible, but when her father puts her in charge of his care while he’s staying with them, Maggie can’t help but see a different side to Alex than she first thought, something that makes her feel things she’s terrified of feeling. As Alex’s health deteriorates, Maggie is going to have to fight if she wants to save his life and secure her part in the Family’s future….

To date this is the third novel by Tiffany Schmidt I was read and I have to say I’ve been impressed every time. Schmidt is definitely becoming an author I’m looking out for as I know I will discover a solid, highly entertaining story within her novel, something evident in Break Me Like a Promise and then some. While I really enjoyed Hold Me Like a Breath, I have to say I think I enjoyed this companion tale even more!

The concept within this series is so very interesting; our main characters thus far, Penny and Maggie, have been members of families who trade and specialise in the acquisition and distribution of illegal organs. It’s very Mafia-esq with these Families essentially operating outside the law and conducting what is a criminal business. Yet the Families feature honourable and loyal individuals and a closeness that I really like. They have strong and true connections to those around them. Monetary growth aside, their moral reasons for doing what they do are sound….and I can’t help but genuinely like them all, especially those within the Vickers Family.

We met Magnolia Vickers in the first novel as the secret girlfriend of Carter Landlow who faced the heartbreak of losing him. In Break Me Like a Promise, five months have passed and Maggie is still struggling with her loss. There is a lot of emotions for Maggie to process in this novel including her pain and devastation over losing Carter to the hope and fear she experiences when she begins to open herself up to Alex.

I really liked Maggie. She had passion and gumption that shone through the pain she was experiencing. Tiffany Schmidt wrote her with a big heart and a lot of fire. I liked that she was quick thinking and didn’t hesitate to fight for what she wanted. I also found myself feeling for her loss; not just of Carter, but the future they had planned and I couldn’t help but be genuinely hopeful to see her to experiencing small moments of happiness as she learnt to live again, something that was very much because of Alex.

Personally I found Maggie’s journey to new love to feel believable and genuine. My only thought was that perhaps five months had been a little too small a time to allow someone to adequately grieve the loss and be ready to move on from the person they had loved and had secretly been seeing for seven years. I think I would have believed it just a tad more if more time had passed, but that being said the sincerity of this story was never impacted because of this.

As a main part of the story Alex himself was very endearing and my heart just broke for him and all he had been through. This Spanish speaking tech wiz won my heart (alongside Maggie’s) and as the story progressed, I fell for him more and more. Something I especially adored about this novel is that Maggie’s growing feelings for Alex never discount all she had felt for Carter, though the guilt Maggie experienced and insecurity Alex felt over his place in her heart was very believable and understandable.

Break Me Like a Promise was a truly brilliant read. It was wonderful seeing Penny and Char make an appearance and I only hope that Tiffany Schmidt may have other stories in mind because there are characters including Cayleigh, Garrett and James that definitely leave me intrigued. I highly recommend this novel and am still thinking about its brilliant storyline even after I’ve turned the final page—simply wonderful!