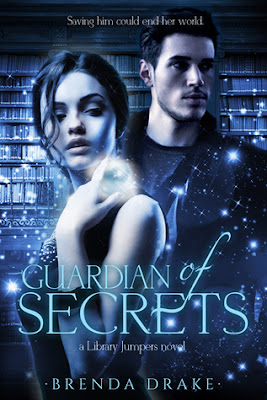 Saving him could end her world.

Being a Sentinel isn’t all fairytales and secret gardens.

Sure, jumping through books into the world’s most beautiful libraries to protect humans from mystical creatures is awesome. No one knows that better than Gia Kearns, but she could do without the part where people are always trying to kill her. Oh, and the fact that Pop and her had to move away from her friends and life as she knew it.

And if that isn’t enough, her boyfriend, Arik, is acting strangely. Like, maybe she should be calling him “ex,” since he’s so into another girl. But she doesn’t have time to be mad or even jealous, because someone has to save the world from the upcoming apocalypse, and it looks like that’s going to be Gia.

Maybe. If she survives.


Review:
Guardian of Secrets is the second novel in Brenda Drake’s Library Jumpers series and is a fast paced and eventful sequel that will definitely keep readers on their toes.

Gia Kearns whole world changed the day she learnt she was a part of a race of beings known as Mystiks, able to travel to different places and dimensions by jumping through library books. Discovering she’s a part of a prophecy to one day defeat the biggest threat to the Mystiks, Gia has become a Sentential, training and preparing to save the world from a coming apocalypse. Not only has she and her dad had to move away from everything and everyone she’s ever known, but now Gia has been tasked with locating rare items of magical abilities that have been hidden for decades. Oh, and her boyfriend Arik is all of a sudden more interested in another girl than her and is breaking her heart in the process. Danger is right around the corner in the Mystik world and Gia is right in the heart of it…..

Although it’s been a while since I read the first novel Thief of Lies, I found it very easy to slip into the world explored within this series. Brenda Drake details a very easy to follow but action and adrenaline packed series. There’s enough going on within each novel and the characters have enough chemistry to keep me reading. Admittedly there are some things I like about the series more than others, but overall I find I enjoy following Gia on her journeys.

I like seeing all the different characters and discovering how they all fit in together. In a sense Library Jumpers makes me think of a cross between the Mortal Instruments series by Cassandra Clare and Mythos Academy by Jessica Estep. It’s a good blend that makes for entertaining reading.

I must admit, I was a little perplexed by the devolvement of the relationship between Gia and Arik in this novel. While they didn’t blow me away with their relationship in the first novel, I did enjoy their chemistry and connection enough to feel that Arik’s decision to turn his back on what they shared and take up with another girl straight away was disappointing. Eventually author Brenda Blake reveals the reason for this development, but it still felt somewhat unnecessary for my tastes and I felt that is could have been handled better. Plus I’m just not comfortable with seeing a love triangle in the series—it’s annoying to me.

All that being said, I did find Guardian of Secrets to be a decent read and will definitely be reading the final instalment to see how Brenda Dlake plans on tying everything together and concluding the series. After the ending of this second novel, I’m sure she has a lot of excitement planned.