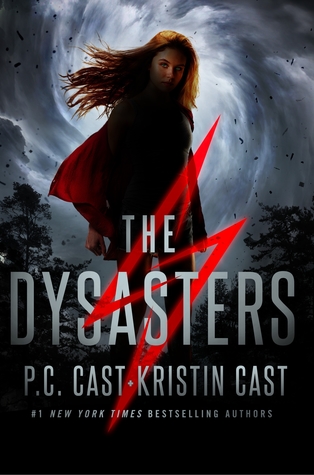 The Dysasters by P.C. Cast & Kristin Cast
Releases on: May 1st 2018
Add on Goodreads!

Foster Stewart knows she's different. Her life has never been "normal." Talking to plants and controlling cloud formations aren't things most seventeen year olds are into. Tate "Nighthawk" Taylor is perfect. Star quarterback and all around dreamy boy next door he never thought about his "extra" abilities. What quarterback wouldn't want night vision? That's not weird, right? It's cool!

But on the night of their first meeting a deadly tornado brings them together and awakens their true abilities - the power to control the element air. Unbeknown to Tate and Foster, they are the first in a group of teens that were genetically manipulated before birth to bond with the elements. Which truly sucks for Foster, as she has to face the fact that Dr. Rick Stewart, her beloved scientist father, betrayed her and now wants to use her and the others for his own nefarious world domination plot.

Foster and Tate must stop Dr. Stewart and his minions before he destroys their lives and the world.

Thoughts:
First off, let's just mention that cover....that kick-ass, electrifying cover...I LOVE it. It rocks; it straight away stands up and demands attention. Then lets talk about how this is P.C. Cast AND Kristin Cast!! They do some amazing work together. And then finally, lets look at that description--talking to plants, extra abilities, genetically manipulated before birth?!?! Hell to the yes. PLEASE let it be May already!


What do you think of  The Dysasters? Will you be looking to read this one?
And what are you waiting on this week? Let me know in the comments!