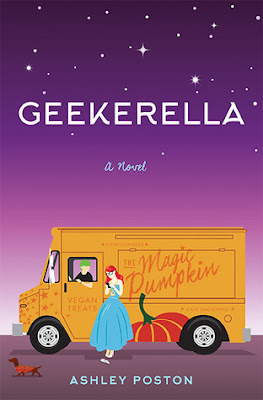 Geek girl Elle Wittimer lives and breathes Starfield, the classic science-fiction series she grew up watching with her late father. So when she sees a cosplay contest for a new Starfield movie, she has to enter. The prize? An invitation to the ExcelsiCon Cosplay Ball and a meet-and-greet with the actor slated to play Federation Prince Carmindor in the reboot. With savings from her gig at the Magic Pumpkin food truck and her dad's old costume, Elle's determined to win - unless her stepsisters get there first.

Teen actor Darien Freeman used to live for cons - before he was famous. Now they're nothing but autographs and awkward meet-and-greets. Playing Carmindor is all he has ever wanted, but Starfield fandom has written him off as just another dumb heartthrob. As ExcelsiCon draws near, Darien feels more and more like a fake - until he meets a girl who shows him otherwise. But when she disappears at midnight, will he ever be able to find her again?

Part-romance, part-love letter to nerd culture, and all totally adorbs, Geekerella is a fairy tale for anyone who believes in the magic of fandom.

Geekerella by Ashley Poston is a fun and endearing contemporary Cinderella retelling that will appeal to every sci-fi geek and fangirl at heart. Expect to be catapulted into an adorable romance that is guaranteed to make you smile from beginning to end.

Seventeen year old Danielle “Elle” Wittimer lives and breathes Starfield, the science-fiction show she grew up watching with her late father. Elle has spent many-a late nights watching Starfield reruns and writing about the show on her blog. When Elle learns of a cosplay contest being held for the new Starfield movie with the winner scoring exclusive tickets to the ExcelsiCon Cosplay Ball and a meet and greet with the reboots star, the man playing Elle’s idol from the show, Federation Prince Carmindor, she knows she just has to enter. Seeing her favourite show remade is a dream come true, even if the guy playing Carmindor is someone Elle doesn’t like. Being cast as the lead in the new Starfield movie is all Darien Freeman has ever wanted. He grew up attending cons and obsessing over the show and even though he is now a rising star, Darien is still very much a geek at heart. Too bad none of the critics see him as anything other than a pretty face. Struggling more and more Darien is sure he’s about to crash and burn until a moment of chance sees him in contact with a girl who makes him feel normal for the first time in a long time. Darien and Elle may be worlds apart, but as they bond over their shared love of the Starfield fandom, will they find the strength to stand up for what they want, even if it means making tough decisions?

If you’re looking for something fun and quirky then Geekerella is the book for you! As someone such as myself who loves sci-fi and her comic-cons, this novel was a tale after my own heart. Simply put, Geekerella was just adorable. Unfolding in the back and forth POV’s of both main characters, Geekerella was a really laid back, easy read that was full of fun dialogue, entertaining moments and sweet friendships and romance. It featured a cute as pie storyline that while being totally predictable was also highly addictive.

Geekerella introduces readers to two hilarious and likable characters in the form of Elle and Darien. It’s honestly impossible not to adore and vie for both Elle and Darien as you read the story. Elle was a very down to earth main character who encompassed many characteristics that made her seem like someone you could easily call a friend, while Darien was endearingly hopeless. He may be a rising star with a great body, but he was a geek at heart with a hapless nature and a kind soul.

One of my favourite parts about Geekerella was of course the relationship between Elle and Darien. Their romance is a large part of this novel however it’s not necessarily about the physical aspect that will win your heart. As they correspond over various smile inducting text messages, Elle and Darien bond over their shared love of Starfield and slowly begin to care deeply about each other. It was exciting seeing them interact in person yet have no idea who the other is, only to eventually discover it as we all waited with bated breath.

Overall a smart and enjoyable read, Geekerella is downright adorable at times and endearing throughout. I’m definitely impressed with this first novel I have read by Ashley Poston and will keep an eye out for whatever she releases next!