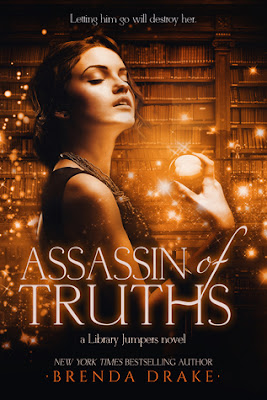 The gateways linking the great libraries of the world don’t require a library card, but they do harbor incredible dangers.

And it’s not your normal bump-in-the- night kind. The threats Gia Kearns faces are the kind with sharp teeth and knifelike claws. The kind that include an evil wizard hell-bent on taking her down.

Gia can end his devious plan, but only if she recovers seven keys hidden throughout the world’s most beautiful libraries. And then figures out exactly what to do with them.

The last thing she needs is a distraction in the form of falling in love. But when an impossible evil is unleashed, love might be the only thing left to help Gia save the world.

Assassin of Truth is the third and final novel in the Library Jumpers trilogy by Brenda Drake bringing the series to a climactic and thrilling end.

This is it. After everything Gianna Kearns has been through, she is about to embark on her most important mission yet and hopefully save the Mystik world from the various dangers currently facing it. As a mysterious disease makes its way through the covens, Gia and her allies race to find a cure to stop the spread of the disease and save those affected while also preparing to stop Conemar before the evil wizard brings to life a monster said to be unstoppable. Time is running out and with Gia unsure who she can trust, making mistakes now might mean those she love will pay the ultimate price….

Brenda Drake brings the Library Jumpers series to a close with Assassin of Truth, another enjoyable read that will keep readers guessing until the very end but see the victories obtained throughout the story come at a cost. The characters fight for their very survival, but not everyone is guaranteed to make it out alive and emotions run rampant, especially with the climactic ending.

Personally I’ve enjoyed reading this series. It’s had a solid storyline and enough action and excitement to keep me entertained. I’ve liked Gia as the main character and thought she was easy enough to follow throughout the story. I feel like she’s remained solid over the course of three books and feel like her growth was just enough to compliment the storyline.

Brenda Drake has written a very vast and large array of minor characters who have helped Gia throughout her journey. From Bastien, Arik, Nick, Afron, Pop, Nana, Uncle Phillip, Deidre, Emily, Jaran, Lei, Demos, Aetnae, Faith, The Red and Carrig amongst others, they have all brought something kind to the story with friendship and familial bonds often see throughout the story.

My only real disappointment was the love triangle between Arik, Gia and Bastien. Though Gia finally makes her ultimate choice once and for all in Assassin of Truth, I have personally never massively strong emotions towards either of Gia’s choices and felt like she could have chosen either option and I wouldn’t have been too concerned. That being said, I think she chose well.

Overall, this series has definitely been worth a read. Brenda Drake has created an interesting world and concept and it easily swept me into a magical world of danger and adventure.