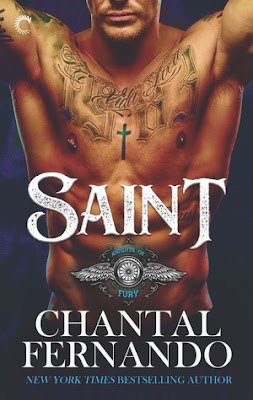 Five years. That’s a long time to go without talking to somebody, especially someone who was such a huge part of your life…

A letter from my first kiss and my childhood everything…from prison.

He may be nicknamed Saint, but this sweet, sexy biker most definitely has a wild streak. Hearing from him draws me right back into the Knights of Fury motorcycle club—the people I’ll always think of as family.

He’s still the only man I’ve ever wanted.

Each good, old-fashioned letter from my “prison pen pal” has my heart racing. Which is nothing compared to how I feel when Saint surprises me in person, as a free man.

I was just a kid the last time we saw each other, but the connection between us now is anything but innocent.

He’s the type of man who would do anything to protect his woman. And with my world crashing down around me, that’s exactly what I’m going to need.

Saint is the first novel in Chantal Fernando’s new MC series Knights of Fury and is a quick and engaging biker romance that will entertaining from beginning to end.

Five years ago, Skylar O’Conner lost the only father figure she had ever known when her mother took her and left her then husband----Sky’s stepfather and president of the Knights of Fury Motorcycle Club. Losing the love of her father and his band of brothers hurt but Sky has tried her best to put the past behind her; until she’s contacted by her childhood crush and Club member Saint who writes her a letter……from prison. Once upon a time Saint was Sky’s everything and she dreamed of the day when the older prospect would see her as more than just a schoolgirl with a crush. Hearing from him now reawakens not only the desire she once harboured as a girl, but all the questions Sky has about why she mother and her left. As Sky sets out to find out the truth, Saint’s steadfast love and loyalty may be the only thing that will keep her up when her whole world begins crashing down.

I have to be honest; I don’t read a lot of biker novels. I know that MC novels have become widely popular in recent times, but of the ones I’ve given a go I find them too vulgar and violent for my tastes. So I tend to steer clear of them, but not Chantal Ferdando’s novels. I love the way she is able to blend the drama and angst of a MC novel with a passionate love story. Fernando manages to write sex, drama and passion perfectly as far as I’m concerned. I don’t hesitate to pick up one of her MC novels and having adored the Wind Dragon’s MC and Cursed Ravens MC, I’m always super excited to discover she has a new one coming out.

Which leads me to Saint, the first novel in her new Knights of Fury MC series and the start of what I have no doubt is going to be another fabulous biker series with tangible characters and camaraderie to die for. Told through the eyes of twenty-one year old Skylar, Saint is an entertaining and enjoyable romance. A quick but well told story, Saint follows likable characters and has all the drama, angst, sizzling and sex readers could want.

Protagonist Sky was easy to follow. Her family situation was all kinds of messed up. Despite being a sweet albeit somewhat naïve person, the way in which Sky was treated by her mother was heartbreaking. A parent—especially a mother—is meant to be there to protect their child and instead Sky’s mother was a jealous and resentful woman whose actions towards her daughter were abhorrent. I felt so bad for Sky and couldn’t understand how her mother could treat her as she did. The saddest part is that I know this happens in real life, so I found myself appreciating the happiness Sky found all the more for that.

I’m really excited for Chantal Fernando to continue this series. She’s already introduced me to club members I’m genuinely looking forward to seeing feature; Renny, Dee, Temper….I think they will all make great leading men when their time comes and I can’t wait to see it happen. Fun, romance and effortless reading, Saint was a great kickstart to a new MC series from Chantal Fernando!