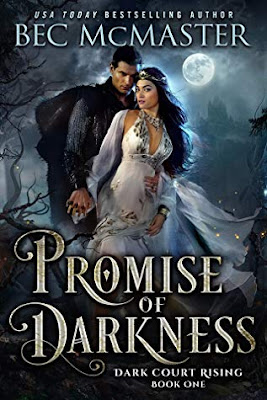 Princess. Tribute. Sacrifice. Is she the one prophesied to unite two warring Fae courts? Or the one bound to destroy them?

In a realm ruled by magic, the ruthless Queen of Thorns is determined to destroy her nemesis, the cursed Prince of Evernight.

With war brewing between the bitter enemies, the prince forces Queen Adaia to uphold an ancient treaty: she will send one of her daughters to his court as a political hostage for three months.

The queen insists it’s the perfect opportunity for Princess Iskvien to end the war before it begins. But one look into Thiago’s smouldering eyes and Vi knows she’s no assassin.

The more secrets she uncovers about the prince and his court, the more she begins to question her mother’s motives.

Who is the true enemy? The dark prince who threatens her heart? Or the ruthless queen who will stop at nothing to destroy him?

And when the curse threatens to shatter both courts, is she strong enough to break it?

A fairytale twist inspired by the Hades and Persephone myth.

Promise of Darkness is Bec McMaster’s latest release and the first novel in her new Dark Court Rising series, loosely based on the Greek myth of Hades and Persephone and interwoven with fae mythology, romance and danger.

Princess Iskvien is the second daughter of the ruthless Queen of Thorns and has been promised to the cursed Prince of Evernight for three months as a political prisoner. Queen Adaia is determined to destroy her nemesis and hopes Vi’s time at court will allow her the chance to kill the cursed prince. Vi instead hopes that preventing a war between the two opposing courts will protect her people, but one glimpse into Thiago’s darkly mischievous eyes and she knows she’s in trouble. Vi has grown up with tales of the mysterious and supposedly cruel prince, but as she begins to uncover Thiago secrets, she begins to question her mothers’ motives? Is his court truly as evil as she has been led to believe and is the true enemy perhaps closer to home?

I’ve absolutely adored Bec McMaster’s novels in the past but both the series I read were steampunk—London Steampunk and London Steampunk: Blue Bloods Conspiracy to be specific—so it was an exciting experience for me finally branching out and discovering more of her storytelling abilities in Promise of Darkness. And I really loved what I discovered! McMaster is a fantastic storyteller and builder of worlds, evident in this story from the opening pages.

Twisting together a rich and darkly vibrant world of Seelie and Unseelie fae, Promise of Darkness introduces readers to a luscious and dangerous world of deception, political intrigue and fae courts. The novel unfolds through the eyes of Iskvien, a Seelie princess who is a pawn in her mother’s never-ending crusade against her nemesis; a fellow ruler, the Prince of Evernight. In order to uphold a centuries old treaty, Vi as she is known, is to spend three months with this stranger but in typical Bec McMaster fashion, readers will soon realise that not everything is as it seems as McMaster makes it clear there is more going on than a simple exchange of political prisoners.

Vi was a good heroine to follow in Promise of Darkness. She’s determined and focused and not overly swayed by other people. Vi does feature a clear desire to win her mother’s approval however but as the novel progresses she becomes surer and surer of her own thoughts and feelings. Bec McMaster twists the possible Hades and Persephone retelling into a romance with a whole new texture and this sees Vi facing a lot of confusion and uncertainty as Promise of Darkness unfolds. I won’t give too much away, but I thought it was clever some of the developments McMaster made.

With Vi’s romance with Prince of Evernight Thiago the biggest focal point in the novel, it was interesting seeing Thiago fight for Vi’s heart. Thiago is charming and cheeky and there is a reason behind his madness as Thiago sets out to seduce Vi and win her heart. Sizzling kisses and moments of hilarious verbal sparring litter the story as the two of them connect and Vi falls in love. They have chemistry together and given their situation I think Bec McMaster actually allowed Vi to fall for Thiago genuinely over the three months.

Although the novel unfolds through Vi’s perspective only, I’m interested in seeing if this will remain the chase throughout the rest of the series. McMaster fills this lush fae world with a great cast of supporting characters; many of which are from Thiago’s court and I’m curious whether we will see any tales through their eyes. Eris, Thalia and Kyrian are of most interest to me and given how Promise of Darkness concludes, I’m super excited to read more.

Beguiling and perfect for fans of Sarah J. Maas and Holly Black, Promise of Darkness is a thrilling read and what looks like a very promising series and leaves me ready to read the next novel as soon as it comes out!