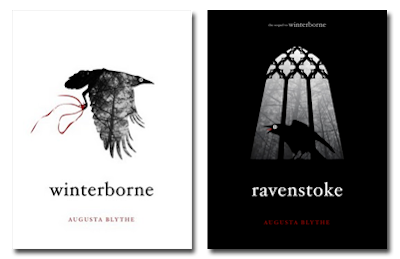 Author Augusta Blythe has kindly offered up ecopies of her novels Winterbourne AND Ravenstroke to ONE of my followers! I also have an excerpt from the second book Ravenstroke to share with you that is hilarious and is sure to pique your interest.

Winterboure:
Sixteen-year old Mia Winterborne is destined to be special. Details are sketchy, though, as her dad disappeared with all the answers when she was five. Mia only knows that she'll inherit her kickass superpowers on her seventeenth birthday. Helping Mia prepare for her anticipated ascendancy is Loie Bryce, her best friend and eternal sidekick extraordinaire. The girls intense friendship has never wavered until now, when Andreas arrives in Salcey Ridge. They both fall hard for the British hottie, who quickly becomes a fixture in their lives. When they discover that Andreas is not who he appears to be, the frightening reality of Mia's powers finally hits home. The nearer Mia's birthday draws, the more the danger escalates and long-buried lies are exposed, putting the girls on a path that they never expected.
View Winterboure on Goodreads or buy it from Amazon or Barnes and Noble!

Ravenstroke:
In Winterborne, Loie and Mia's seventeenth birthdays brought more drama and surprises than they ever expected. Now, in Ravenstoke, they are adjusting to the aftermath and struggling to keep those newfound powers in check. When Andreas is called away to England under mysterious circumstances, a new guy is sent to Salcey Ridge in his place. Cian is smarmy and cocksure and Loie wants nothing more than to unleash a hellhound on him. Unfortunately, Cian isn't the only complication in their lives as the girls must also contend with the reappearance of Mr. Winterborne himself and Loie's most dreaded fear of all - a part in the school musical. Can the girls survive the rest of junior year unscathed?
View Ravenstroke on Goodreads or buy it from Amazon or Barnes and Noble!

Excerpt:
Once back at the house, I creep in through the patio door and jet upstairs before Georgia sees me. The last thing I need is to explain why I’m soaking wet and what happened to my pants. Mia is already upstairs. Upon hearing my footsteps, she hurries into my room and lets out a hearty laugh when she sees the state I’m in.

“Hey, don’t mock,” I say, taking off Cian’s black jacket and stripping off the rest of my wet clothes. I grab a towel and rub it vigorously all over me. “I almost died.”

“In your Hello Kitty underpants? That would’ve sucked.”

“Yes, Mistress of the Obvious, it certainly would have. I root around for a decent outfit. “Have you read anything about kelpies?”

Mia thinks for a moment. “They look like horses and drag people to their death under water, usually a lake or river.” She glances at the wet pile of clothes on the floor and back at me. “Are you serious? A kelpie in Salcey Ridge?”

“Why not?” I sigh. “Bring us your kelpie, your homicidal pixies, your huddled masses of magic-folk yearning to practice the black arts freely.”

I pull on a pair of jeans and a light blue sweater. There, much more flattering, although I don’t know why I care how I look for Cian McSlick. Basic vanity, I guess.
“Whose jacket is that?” she asks, eyeing the clearly masculine jacket on the bed.
I give my head a little shake to clear away memories of the pixie. “Cian’s. Oh yeah, forgot to mention Cian.”

“Yes, the entire band of Keane happened to pass by and rescue me from the clutches of a kelpie. They’re standing on the riverbank in a brooding formation, playing a song about it as we speak.”

Mia ignores my sarcasm. “Stranger things have happened to us.” I can’t argue with that. “So who is he?”

“Some Universal assigned to stalk me until Andreas gets back.”

“Someone you met in Sanctuary?”

“He’s slimy and sleazy and I’ll bet the only animal he can morph into is a snake.”
“Wow,” Mia says, “all that in how many minutes of meeting him? Sounds like a keeper. So where can we find this Cian? Somewhere Only We Know?”

I groan. An actual Keane joke from Mia. Will wonders never cease? “He’s staying at the cabin. Please come with me. I feel like he’s going to pull the old yawn, stretch so he can put his arm around me.”

“Well, he already managed to get you out of your pants.”

I roll my eyes in disgust. “I need back-up, not back talk.”

“Wild horses couldn’t drag me away,” she says with a wink. Oh, the hilarity at my expense. I’ll remember this the next time she skids toward death.

Wonderful excerpt, right? The series sounds fantastic! To win ecopies of both books here's what you have to do.....

Giveaway!
-Simply comment on the post with a way to contact you!
-ONE winner will win both books.
-Giveaway is open INTERNATIONALLY!
-You DO NOT need to be a follower to enter, although it's always appreciated.
-Giveaway will run from today (the 17th of Feb) until the 2nd of March.


I'd like to thank Augusta Blythe for offering these ebooks and to urge you all to check them out!
Good-luck!