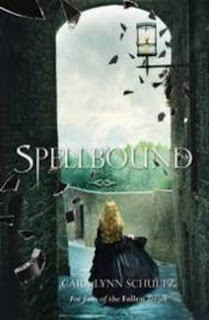 Life hasn't been easy on sixteen-year-old Emma Connor, so a new start in New York may be just the change she needs. But her new posh Upper East Side prep school? Not so much. Friendly faces are few and far between, except for one that she's irresistibly drawn to — Brendan Salinger, the guy with the rock-star good looks, who is also the richest kid in school. Even when Brendan inexplicably turns cold, Emma can't stop staring. Ever since she laid eyes on him, strange things have been happening. Streetlamps shatter whenever she walks by, and Emma's been having the oddest dreams. Visions of herself in past lives — visions that warn her to stay away from Brendan. Or else…

Spellbound is a fun, bewitching tale that will lure you in with its magic and mystery and steal your heart with its romance and action!

Ordinarily, I’m not really a fan of reincarnation tales. Don’t get me wrong, I love the idea of past lives and two souls being meant for each other, but for some reason I always find the books I read that feature this idea lackluster and boring. Authors can’t seem to get it “right” and in turn I find myself detached from the tale. I’ve read a fair amount of these kinds of books, but I can truly say Spellbound is not one of those—I thoroughly enjoyed this book! I was actually a tad surprised by how much I adored it, only having so many expectations when I began.

Cara Lynn Schultz blends together a fantastic paranormal tale with normal teen drama in a way that will capture you from the very first chapter! Her writing flows perfectly and her well set out plot and back-story had me itching to know more the entire way through. Schultz reveals the details of the past our two main characters share steadily throughout the book and the dreams and flashbacks witnessed by our heroine were the perfect tool to have me more intrigued with the turn of each page.

One of the appeals held by Spellbound is its heroine. I’m not sure I can adequately describe how much I liked Emma Connor. Her voice was so real. Schultz hasn’t written her as a rebel, or a shy girl, or a closeted pretty girl, but rather a character with bits of everything thrown in. Set in a very believable high school situation, Emma dealt with all the problems everyday teenagers face.....cruelty, jealousy, unwanted rumors and she acted just how I’d expect people I know to react. She had her fears and her flaws, and her insecurities were something she had to overcome, but throughout it all she faced it with strength, fire and a normalcy that made her oh, so easy to read about.

Cast with a fantastic array of characters, indulging her Aunt Christine and her cousin Ashley, Emma navigates the perils of her new school, Vincent Academy, meeting a range of quirky characters along the way including her gay friend Cisco and her witchy friend Angelique. Emma quickly finds herself drawn to her new classmate Brendan and soon strange occurrences set in motion the events of the book. I generally liked Brendan. He was intelligent, sweet and extremely protective. He’s not fooled by the pettiness of most of the students at his school and he wasn’t affected by his wealth or his family’s position. He was a nice guy, funny and was more than happy to defend Emma when she needed it. I liked how protective he was of her and how deeply he came to care about her.

With the impact of their shared past lives on their current romance, Emma and Brendan’s relationship was always going to come on fast, but Cara Lynn Schultz sets such a good foundation for it in the early interactions the two share that this doesn’t actually seem to be the case. Despite the lives they’re shared, I never felt like what they had was based on this. Everything was set very much in the present, other than the initial attraction between the two. Theirs was a very sweet romance, tinged with passion and it was lovely to read about.

With so much going on it this book, much of the ending was a surprise. It was very dramatic and heart racing. I think that even though this chapter of Emma and Brendan’s story is over, there are a lot of places the author could go and things she could explore, especially considering Emma’s heritage and history.

A fun, fantastic read, Spellbound is bound to leave you, well....spellbound!

Source: Sent for review by Harlequin Australia (Thank-you so much Gabby!)
Format: Paperback
AU Release Date: Available now!
Recommend:Yes.
Recommend borrow or buy: Buy it.
Cover: I do actually prefer the US version better; the simplicity of it is stunning, but I very much like this one too. It's pretty.
Read sequel/continue with series:Yes! I'm looking forward to more Emma and Brendan!
Challenge: 2012 TBR Pile Reading Challange.