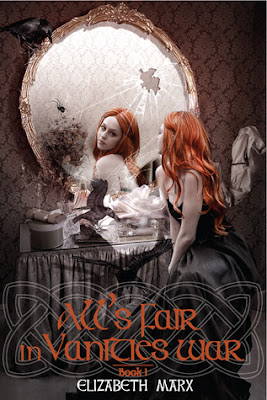 Salem’s always held sinister secrets. No one understands this better than a sixteen-year-old girl who dies on Halloween night and is reborn a Seer.

The Seer can’t imagine anything worse than being an invisible teenager with enormous black wings. Until she finds out she’s been sacrificed to watch over Locke’s new flame.

Locke Cavanaugh is a Druid, and part of the Order, a clandestine organization entrusted with keeping its members cloaked in the Ordinary world. Physically scarred from the accident that took his girlfriends life, Locke is searching for the OtherWorldly magic that damaged him, because only those without blemish can rule the Order. And once at the helm of the Order he has every intention of finding those responsible for her death.

On the West Coast, Keleigh Flaherty witnesses her parents’ murder by beasts that should only exist in nightmares. She is whisked off to the safety of Salem, where she learns how potent and dangerous her concealed Vate talents are. Keleigh wants to be Ordinary, but when her mother reaches out from the OtherWorld, and implores her to find a forgotten relic she’ll have to use all her ExtraOrdinary powers to locate it.

As Locke and Keleigh join forces, they unravel the Order’s involvement in the witch hysteria and murmurs of a Celtic prophecy. While Locke’s affection for Keleigh blooms, The Seer is torn between her duty to protect Keleigh, and her desire to stop Locke from making the ultimate sacrifice in order to earn Keleigh’s love . . .

But if they don’t find the witches bottle before the
ShiningOnes do, someone stalking Keleigh from the shadows will take her instead and plunge all worlds into chaos.

Thoughts:
Alright, so this cover is just stunning. There's a lot going on with the vanity table and the mirror and the girl, but what an effect it has! It's so gothic and beautiful--love it! The story sounds interguing too...
Add it here!

What do you think?