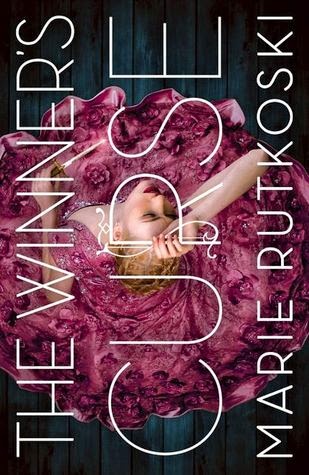 Winning what you want may cost you everything you love.

As a general’s daughter in a vast empire that revels in war and enslaves those it conquers, seventeen-year-old Kestrel has two choices: she can join the military or get married. But Kestrel has other intentions. One day, she is startled to find a kindred spirit in a young slave up for auction.

Arin’s eyes seem to defy everything and everyone. Following her instinct, Kestrel buys him—with unexpected consequences. It’s not long before she has to hide her growing love for Arin. But he, too, has a secret, and Kestrel quickly learns that the price she paid for a fellow human is much higher than she ever could have imagined.

Set in a richly imagined new world, The Winner’s Curse by Marie Rutkoski is a story of deadly games where everything is at stake, and the gamble is whether you will keep your head or lose your heart.

A rich and compelling read, The Winners Curse is a beguiling tale of politics, secrets and honour woven together with a complex love story that spans different social standings and sees a strong young woman face losing everything she loves for the chance to save her people.

I’ll be honest, heading into The Winner’s Curse I was really apprehensive as I’d never read any of author Marie Rutkoski’s work and didn’t know what to expect. To begin with the stunning cover stole my heart and the description at the back of the book had me very excited, but I was worried. I’d seen some mixed reviews and wondered if perhaps the book wouldn’t live up to my expectations. Well, it didn’t…it exceeded them!

The Winners Curse has to be one of my favourite books this year so far; I’m just putting that out there! From the moment I opened the book, I found myself entranced by Rutkoski’s glorious tale. The Winners Curse is a stunningly written tale of deception and war that sees Rutkoski depict two very different societies of people; the Valorian, a powerful and strong race and the Herrani who are enslaved to the them and fighting to regain their freedom.

Told predominantly through the eyes of Krestal, the daughter of the Valeroin's most celebrated general, The Winners Curse is a wonderfully depicted novel. Marie Rutkoski excels in her world building and wonderfully follows a young woman who has only two choices for her future; to either marry or enlist in her empire’s military. With neither choice appealing to her, but with time running out to choose, Krestal’s life dramatically alters when she witnesses a slave auction one day and takes a chance by purchasing a young slave by the name of Arin who calls to her as a kindred spirit.

As the main character, I really liked Krestal. Even though she is a noblewoman and has been raised as a lady, she’s quite capable and biting. Krestal is level headed and quick thinking. She is a strategist and despite her instance that she does not wish to join the military, has quite a mind for it. She knows how to take care of herself and makes some really self-sacrificing choices in The Winners Curse.

There’s something very conflicting about this story. Although Krestal’s voice is the dominant one throughout the story, The Winners Curse is also detailed through Arin’s eyes at times, creating a delicious layer of complexity within the story. You’ve got two opposing sides, both equally right and equally wrong in their choices; they’re both fighting for power and supremacy over the other, even if their motives and drives differ at times. For me, The Winners Curse made me question a lot of humanity and I liked the way Marie Rutkosi explored the pitfalls of war and the effect if can have on the simple people who have to live with its consequences.

As the male lead, and someone who’s POV we experience during The Winners Curse, Arin was a very complicated character himself. He was enslaved when the Velarian invaded his home and has spent the last decade of his life being treated like an animal and forced to work for those who conquered his country; having been repeatedly bought and sold over the years. The contradiction in Arin is that although he is used to manual labor and hard work at the hands of his masters, he is also very cultured and intelligent; having been someone of class prior to the war that turned his world upside down. He hides a lot of secrets, many of which see him keeping certain truths from Krestal; something that impacts on their growing relationship, especially seeing how disastrous Arin’s intentions and plans will bring destruction to Krestal's world.

Personally, I just found this book to be a real conundrum because neither side could win without bringing disaster down upon the other. Who is deserving really isn’t who you expect at the times and the change in power and position is something that shifts multiple of times within the novel.

With Krestal and Arin’s relationship a focal point in the story, but also woven together heavily with politics and war, I really liked what Rutkoski did with their relationship. Both from different classes, they're very different but connect so beautifully. Krestal can be herself with Arin and she appreciates him for his swift mind and manner rather than his use. They really are star crossed lovers with betrayal something neither can avoid when love mingles with war and I’m so very excited to see how Rutkoski develops their romance in the next book considering the shocking ending.

Author Marie Rutkoski launches herself into the fantasy genre with her explosive novel The Winners Curse, proving that she is definitely a voice to watch in the future!

Source: Sent for review by Bloomsbury Australia (Thank you Sonia!)
Format: Paperback
Buy it: Bookworld | The Nile | The Book Depository | Amazon
My Recommendation: This book is brilliant and a must read for fantasy lovers!
Cover: I think it's absolutely beautiful--one of my faves this year so far!
Will I read sequel/continue with series: Yes, I can't wait.