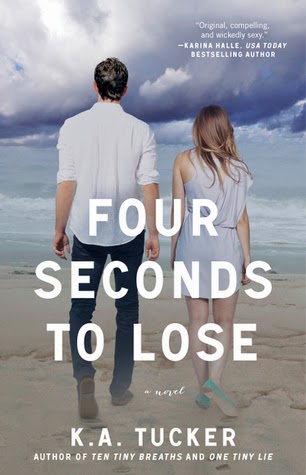 When a gorgeous young dancer walks through his door, a strip club owner must decide whether to follow his rules or his heart in the third novel by the author of One Tiny Lie and Ten Tiny Breaths.

Owning a strip club isn’t the fantasy most guys expect it to be. With long hours, a staff with enough issues to keep a psych ward in business, and the police regularly on his case, twenty-nine-year-old Cain is starting to second guess his unspoken mission to save the women he employs. And then blond, brown-eyed Charlie Rourke walks through his door, and things get really complicated. Cain abides by a strict “no sleeping with the staff” rule. But being around Charlie challenges Cain’s self-control…and it’s been a long time since any woman has done that.

Twenty-two-year-old Charlie Rourke needs a lot of money, really fast, in order to vanish before it’s too late. Taking her clothes off for men makes her stomach curl but Charlie tells herself that at least she’s putting her acting and dancing skills to good use. And though her fellow dancers seem eager to nab their sexy, sophisticated, and genuinely caring boss, she’s not interested. After all, Charlie Rourke doesn’t really exist—and the girl pretending to be her can't get distracted by romance.

Unfortunately, Charlie soon discovers that developing feelings for Cain is inevitable, and that those feelings may not be unrequited—but losing him when he finds out what she’s involved with will be more painful than any other sentence awaiting her

Four Seconds to Lose is the stunning third instalment in K.A. Tucker's impressively emotional Ten Tiny Breaths series and is a beautifully told story of sensual romance and surprising depth.

Man, I’m seriously in love with this series! Every book is brilliantly written and depicts an addictive story that is impossible not to get lost in! K.A. Tucker is fast becoming one of my favourite NA authors thanks to the beautiful way she writes her stories and the enigmatic bunch of characters she has introduced us to in this series. I already have a list of characters whose stories I would love to see; I just know these individuals have their own tale’s to tell and I’m hoping Tucker capitalizes on this fact and makes us readers very happy.

Finally telling Cain’s story, the alluring and contradictory strip club owner who won our hearts back in book one, Four Seconds to Lose is the first book in the series so far that is told in dual POV—featuring the voices of both Cain and his lady love, Charlie. While I’ve loved how Ten Tiny Breaths and One Tiny Lie were written, I honestly think this dual POV helps enhance the reading experience in Four Seconds to Lose. Personally, I’ve always preferred dual POV in this kinds of books and I think reading through both Cain’s and Charlie’s eyes makes it easy to understand how the character are feeling.

Cain has always been an enigma for me. He’s a delightful contradiction that I loved getting to uncover during Four Seconds to Lose. Ever since we were introduced to Cain back in Ten Tiny Breaths Cain has been a mystery I’ve wanted to solve. A strip club owner with honour and integrity, Cain has blown me away time and time again with his unexpected kindness and mercy. A man who looks after his girls and who wants nothing more than for them to escape the dark world of adult entertainment they find themselves in, Cain goes above and beyond to help them out; providing a safe place for them to live and work.

Honestly, Cain is just a beautiful person. He doesn’t take advantage of people and he’s honourable to a fault. This is the kind of man who wants to save everyone; going out of his way to help when he can. He’s tough as nails; he’d have to be in his industry, but he’s such a good person. Basically he’s just an amazing character and I’m so thrilled to see him find love in Four Seconds to Lose.

I have to say, when I pictured Cain falling in love, I’m not sure Charlie is what I had in mind for his match. And yet now seeing them together, I can’t imagine him with anyone else. Charlie is sweet and soft and very gentle but she’s also got guts. This is a girl is a surprising past and a difficult present and any woman who can pack up her life and take up a new identity the way Charlie does to escape a difficult situation is an incredibly strong person in my eyes. Charlie is younger she appears but she’s also very mature considering everything she’s been through and is involved in. I like that K.A. Tucker didn’t allow all of this to make Charlie jaded; she’s too much of a great character for that to happen to.

Despite their differences, or maybe because of them, Cain and Charlie compliment each other so well. From the very beginning the attraction between them is there and K.A. Tucker does a great job building on that until their relationship blossoms. The physical, and sexual, aspect of their relationship is perhaps a bit more graphic than the couples in the previous books, but this wasn’t something that bothered me as I felt Tucker still depicted things tastefully. Charlie makes Cain endlessly happy and Cain does the same for her—basically they’re a great couple and I’m thrilled they found each other.

Continuing to include the previous characters we’ve loved in the storyline, K.A Tucker does an expert job telling this story. Exploring hard issues like drug trafficking and adult entertainment, Tucker manages to humanize the people who are a part of it whom really don't have a lot of options; giving them voices and life. Four Seconds to Lose is a brilliant read that fans of the New Adult genre will not want to miss!

Source: Sent for review by Simon & Schuster (Thank you guys!)
Format: Paperback
Buy it: Bookworld | The Nile | The Book Depository | Amazon
My Recommendation: As one of the best NA series out there, this is a MUST read!
Cover: Perfect!
Will I read sequel/continue with series: YES!