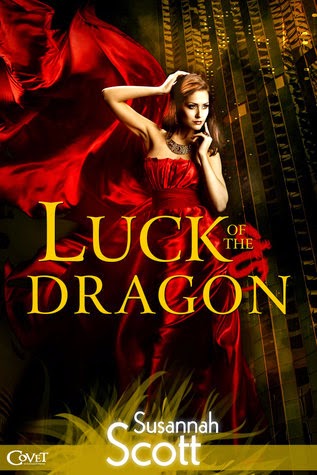 Luciana de Luca has a PhD in sass and gemology—and a problem. Her twin brother’s gambling debts have gotten out of hand, and a mob enforcer is blackmailing her to rob the latest, greatest mega-casino on the Strip. Although Lucy has worked her whole life to get away from her family’s grifter past, to save her brother, she dons three-inch heels and a sluts-r-us dress and struts into Alec’s Gerald’s casino, determined to put her long-forgotten thieving ways to the test again.

Alec Gerald, a shape-shifting dragon, has built the Crown Jewel casino to provide sanctuary for his people amongst the flash and awe of Las Vegas. Unfortunately, the sexy little thief trying to steal his largest diamond exhibit turns out to be his mate, and he must woo her before he loses his dragon form forever. But before he can handcuff her to his bed and explain the details of a mating ceremony, an enemy attacks and threatens to destroy his casino, his people, and his newfound mate.

Luck of the Dragon in the first novel in Susannah Scott’s debut series that follows a bunch of dragon-shifters who own and operate the luxurious Crown Jewel Hotel and Casino in Las Vegas and sees king of the dragons Alec meet the human who is set to steal his heart and become his destined mate.

I’ll be the first to admit that I haven’t exactly gone the traditional route where this series is concerned; considering I read the second book, Stop Dragon My Heart Around prior to reading this first installment. In my defense, I didn’t know Stop Dragon My Heart Around was a sequel before I read it. I quickly realized I had missed a book though and set out to read Luck of the Dragon as soon as possible. I’ve finally had the chance to read Luck of the Dragon, and I have to say I’m thrilled to admit both books are as good as each other!

As a fan of PNR I’ve read lots of shifter tales, although this is one of the few dragon-shifter series I’ve read. I am however quite impressed with the world and characters Scott has written. They’re fresh and unique and endlessly likable. I’m already very invested in the lives of some of the minor characters and eager to hear their tales.

As far as characters go I really liked Lucy and Alec. Lucy is feisty and brave; willing to put herself in difficult situations to help out the brother she loves, but who continues to get himself in strife. Alec was bold, fierce and so, so sexy. As a leader he oozes confidence and goes after what he wants, which in this instance is Lucy.

I thought as individuals they were strong characters and I really enjoyed the romance Scott wrote where they were concerned. They had lovely chemistry and a great connection. I liked that they kept each other on their toes and that despite the struggles they faced and the mistakes made by one of them (not naming names here!) they managed to find their own happily ever after.

Having already read the second book featuring Leo and Tee, I’m already really excited to dive into the third book. Thanks to a little birdie (Susannah Scott!), I know what the third book will most likely feature Mei and Darius and I’m so ecstatic to read their tale!

Source: Sent for review by Entangled Publishing (Thank you guys!)
Format: Ebook
Buy it: Amazon | Barnes & Noble | Kobo
My Recommendation: If you're looking for a fun PNR and you'll enjoy this---and it has dragons ;)
Cover: I think the cover is beautiful--love the flowing nature of the models dress
Will I read sequel/continue with series: Yes