Book Shelf: A Hunger Like No Other (Immortals After Dark #2) by Kresley Cole 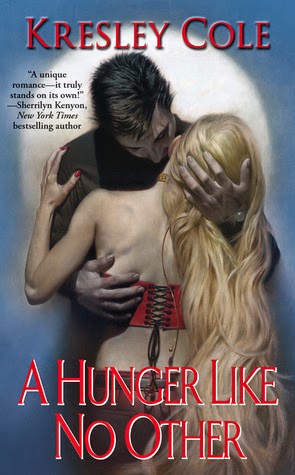 Acclaimed author Kresley Cole introduces a sizzling new series with this tale of a fierce werewolf and a bewitching vampire—unlikely soul mates whose passion will test the boundaries of life and death.

A mythic warrior who'll stop at nothing to possess her...

After enduring years of torture from the vampire horde, Lachlain MacRieve, leader of the Lykae Clan, is enraged to find the predestined mate he's waited millennia for is a vampire. Or partly one. This Emmaline is a small, ethereal half Valkyrie/half vampire, who somehow begins to soothe the fury burning within him.

A vampire captured by her wildest fantasy...

Sheltered Emmaline Troy finally sets out to uncover the truth about her deceased parents—until a powerful Lykae claims her as his mate and forces her back to his ancestral Scottish castle. There, her fear of the Lykae—and their notorious dark desires—ebbs as he begins a slow, wicked seduction to sate her own dark cravings.

Yet when an ancient evil from her past resurfaces, will their desire deepen into a love that can bring a proud warrior to his knees and turn a gentle beauty into the fighter she was born to be?

I've been meaning to read this series for a while; having heard such fabulous thing about Kresley Cole's Immortals After Dark series and while this first installment didn't exactly blow me away, I admit I mostly enjoyed the start of the series.

As a fan of PRN I've read quite a few fantastic series by now and I know many people class the Immortals After Dark series amongst the best. I'm disappointed to say that I didn't "love" this book as much as I expected, seeing as I did have a few issues with the main characters Lachlain and Emmaline and their attitudes, but for the most part I did enjoy it none the less.

Mixing vampires, with werewolf type creatures known as the Lykaes and fey-like creatures known as Valkyries, Kresley Cole has constructed an interesting world within this book. I still feel there's so much more to know about it, but considering A Hunger Like No Other is only the first book in the series, that's understandable. I think there's a lot of directions Cole could go with this series and I'm foreseeing a lot of story development and expansion in the future.

My biggest fault with this book wasn't the vast array of quirky characters we were introduced to that make up the world of the Lore, but rather our hero and heroine Emmaline and Lachlain. Especially Lachlain. In the beginning of this book I really struggled to like these two as characters. I understood the instinctual power of the mateship, and finding/being with ones mate, but to me it felt as though Lachlain forced Emma too much....into sexual situations, into moments that she didn't want to be in. And with no regard for her feelings whatsoever. He seemed cold and unnecessarily cruel and I'm sorry but for the majority of the story I just didn't like him. I admit towards the end of the book I did like him a bit more, but I struggled to reconcile the man from the beginning of the book to the one later on. I understand and appreciate growth in characters, but this seemed too much, too drastically. It was almost as though I was seeing two different people and two different relationships.

I admit I liked Emma a little bit more than Lachlain, even if she annoyed me at times. Obviously she was supposed to be innocent and weak, but she was just a bit too weak and a bit too cowardly. I wanted her to be more than she was and while I liked that she grew some balls as the story progressed, she won't be winning any heroine awards from me.

As a couple Emma and Lachlain were all over the place. They were too much too soon and it just seemed wrong most of the time with Emma afraid, and rightly so of Lachlain, and he forcing her to be with him when she didn't want to. Maybe it's just me, but I feel like Cole could have done a lot better with this--and I supposed I expected better. Although as Lachlain and Emma actually begin to care for one another their relationship does change and becomes a bit sweeter.

And yet, for all it's faults, A Hunger Like No Other wasn't a bad book to read. I'm very intrigued by a lot of the other characters we were introduced to, including Emma's Valkyerie aunts and even though this book didn't suck me in like expected, I still plan to continue on with the series. Here's hoping it gets better!

Source: I bought
Format: Paperback
Buy it: Bookworld | The Nile | The Book Depository | Amazon
My Recommendation: PNR lovers will enjoy this.
Cover: This cover is so very tacky.
Will I read sequel/continue with series: Yes.