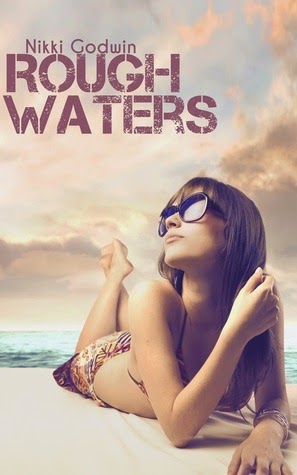 Haley's future has been waiting on the west coast for the past year, but she isn't the only new face in Crescent Cove this summer. When Colby Taylor's parents locate him and interrupt his surf competition, the surf star spirals out of control, dragging Drenaline Surf's reputation through the mud and into the ground with him.

With Colby's secrets plastered across surf magazines and tabloid headlines, Haley takes on the job of playing damage control for Drenaline Surf - which isn't easy when Colby breaks everything he touches, Topher breaks the law, and Miles breaks his leg.

Instead of chasing dreams of forever, Haley spends her summer chasing the unraveling careers of the hottest new faces in the surf world, and she's about to learn what happens when forever doesn't last.

Before I begin to express my thoughts about this novel, I feel I have to warn you that this review is going to be completely filled with spoilers. I have a lot I want to say and there's no way in which I can do that without revealing parts of the storyline, so please read on with caution.

I'm going to be honest; I'm finding it really difficult to wrap my head around this novel right now. I mean, what the hell happened? Rough Waters was a complete and utter disappointment for me. I truly, truly enjoyed Chasing Forever Down--it was a light, fun story with a great romance, and I was so ready to see Hayley and Vin and the gang again and now I feel like I just read a completely different series. Seriously. What gives?

Personally I think that not only is Nikki Godwin an awesome person but a great writer, so I have no idea how to wrap my head around Rough Waters. I know they say never to allow your feelings concerning one character to cloud your judgment, or enjoyment of a story, but I feel like this series just did a complete one-eighty.

What happened?! What the hell happened with Vin?!?! How can he go from being a charming, cheeky love interest for Hayley in book one to a moody, almost non-existent character in the next book. How could Nikki Godwin to that? I feel like she had him written out of the novel before it had even begun.

At the end of Chasing Forever Down, Vin and Hayley's relationship seemed so solid. The storyline ended so promisingly. I was happy; I was hopeful with them....now I just feel gutted! I understand authors like to include love triangles in their stories and sometimes the person the main character ends up with isn’t the same person they started out with or date in the beginning, but I feel like Vin and his relationship with Hayley were just plucked from the story, and I just don’t understand why.

Where was the character growth or reason behind this development or devolvement? Vin was a background character where prior he had been more prominent. I understand people grow apart, but when I read a story if this is the case, I want to at lease witness it—Rough Waters didn’t even allow closure between Vin and Hayley. Vin was just gone, and to be honest this seemed to be in confliction with Vin’s character from the first book.

And Topher and Hayley? Where the hell did that relationship come from!?!? Aside from being Vin's younger brother--a connection I thought was really cute in the first book by the way, Topher didn't seem to be a focal character in the series and then suddenly he and Hayley are as thick as thieves; having been constantly texting and talking during the six months between where Chasing Forever Down concludes and Rough Waters picks up.

I just don’t know how to wrap my head around this novel. It felt so much more disjointed than the first novel and before I loved the magnitude of characters and the dynamic they shared, but in Rough Waters I felt like a lot of the magic was lost.

I’m sad because I was so looking forward to this sequel and now I just feel lost; whether I’ll read the next book remains to be seen. I probably will—simply to see what happens next and whether Nikki Godwin can redeem this series in my eyes.

Source: Sent for review by the author (Thank you Nikki!)
Format: Kindle ebook
Buy it:  Amazon (Kindle) | Amazon (Paperback) | Barnes & Noble | Smashwords
My Recommendation: Summer and fun together.
Cover: I think the cover is very fun and fresh--makes me think of summer
Will I read sequel/continue with series: Possibly....