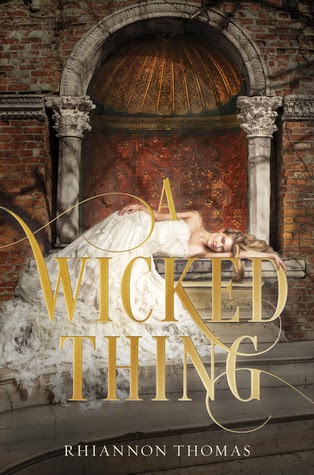 A Wicked Thing by Rhiannon Thomas
Releases on: February 24th 2015
Add on Goodreads!

A spinning wheel. A prick of a finger. A terrible curse.

One hundred years after falling asleep, Princess Aurora wakes up to the kiss of a handsome prince and a broken kingdom that has been dreaming of her return. All the books say that she should be living happily ever after. But as Aurora understands all too well, the truth is nothing like the fairytale.

Her family is long dead. Her “true love” is a kind stranger. And her whole life has been planned out by political foes while she slept. Everyone expects Aurora to marry her betrothed and restore magic and peace to the kingdom before revolution tears it apart. But after a lifetime spent locked in a tower for her own safety, Aurora longs for the freedom to make her own choices. When she meets a handsome rebel, he tempts her to abandon everything for a different kind of life.

As Aurora struggles to make sense of her new world, she begins to fear that the curse has left its mark on her, a fiery and dangerous thing that might be as wicked as the witch who once ensnared her.

With her wedding day drawing near, Aurora must make the ultimate decision on how to save her kingdom: marry the prince or run.

Thoughts:
I actually saw this book on someone else's WOW a few weeks and ever since I've been desperate for it to be released! I just adore fairytale retellings and this one just sounds beyond incredible. I just love the concept and if the stunning cover didn't have me adding it to my TBR list, the idea of a different kind of sleeping beauty tale totally would!

What do you think of A Wicked Thing? Does it sound like something YOU would read?
And what are YOU waiting on this week?