Book Shelf: No Rest for the Wicked (Immortals After Dark #3) by Kresley Cole 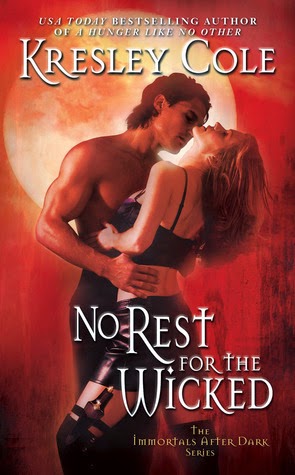 In this next installment in the Immortals After Dark Series, USA Today Bestselling author Kresley Cole delivers a scorching tale about a forbidding vampire who lives in the shadows and the beautiful assassin who hunts him there.

A vampire soldier weary of life...

Centuries ago, Sebastian Wroth was turned into a vampire—a nightmare in his mind—against his will. Burdened with hatred and alone for ages, he sees little reason to live. Until an exquisite, fey creature comes to kill him, inadvertently saving him instead.

A valkyrie assassin dispatched to destroy him...

When Kaderin the Cold Hearted lost her two beloved sisters to a vampire attack long ago, a benevolent force deadened her sorrow—accidentally extinguishing all of her emotions. Yet whenever she encounters Sebastian, her feelings—particularly lust—emerge multiplied. For the first time, she's unable to complete a kill.

Competitors in a legendary hunt...

The prize of the month-long contest is powerful enough to change history, and Kaderin will do anything to win it for her sisters. Wanting only to win her, forever, Sebastian competes as well, taking every opportunity—as they travel to ancient tombs and through catacombs, seeking relics around the world—to use her new feelings to seduce her. But when forced to choose between the vampire she's falling for and reuniting her family, how can Kaderin live without either?

No Rest For The Wicked is Kresley Cole's second installment in her Immortals After Dark and is an exciting, sensual tale featuring a brilliant heroine and a brilliant hero!

Having heard so many brilliant things about this series, I've been so excited to finally read it, that I was disappointed to find that I didn't exactly love the first book in the series. In fact, I had a few issues with it, but I was still ready to give the next book a go....and boy am I glad I did! No Rest For The Wicked was a thrilling read, and so much better than the first book in the series!

From the very opening chapter in this book, I knew I was going to like the main characters. There was just something about Kaderin and Sebastian that drew me from the beginning and as the story progressed I only wound up liking them more.

Kaderin the Coldhearted certainly wasn't what I was expecting. We met her briefly in A Hunger Like No Other and I have to be honest and say there wasn't anything about her that stood out then. And yet in this book, she had me wrapped around her little finger! Kaderin was a fierce warrior and more than capable to taking care of herself, but she was also very likeable, and as her emotions and feelings slowly came back to her in this story, it became quite evident that she had a good heart.

As for Sebastian...wow! What a fantastic male lead! It's no secret that I didn't exactly like Lachlain in book one, but Sebastian shines in No Rest For The Wicked with his good nature and attitude. I have to give Kresley Cole props for writing such a fantastic male character in Sebastian--he held many alpha traits I expect from a PNR hero, but he was also very insecure and unsure of himself in a way that lent to him being a softer man at times. He was a gentleman and honorable and truly did have a good soul. Basically he was the perfect blend of strength and power with intelligence and vulnerability.

Together, Kaderin and Sebastian really did have great chemistry. Cole writes their romance perfectly, with their intensity and attraction undeniable, but their relationship also one that grows and deepens over time. They brought out the best in each other and really enhanced the novel with their chemistry together; evident from the opening chapter.

I must say, I'm becoming quite intrigued by the characters we're meeting throughout the series so far. Every time a new character is introduced, I find myself picturing, and hoping for, future stories featuring them and I'm thrilled to know Cole has written some featuring many of the characters I already look forward to reading about such as Bowen, Reign, Murdoch, Conrad, and more.

After a great installment in this series, I look forward to getting my hands on the next few books!

Source: I bought
Format: Paperback
Buy it: Bookworld | The Nile | The Book Depository | Amazon
My Recommendation: For PNR lovers
Cover: This one is still quite corny, but still sexy.
Will I read sequel/continue with series: Yes.