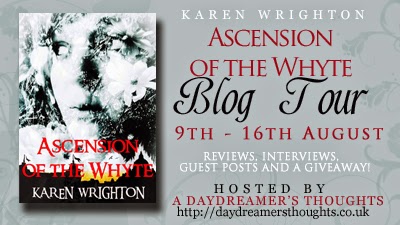 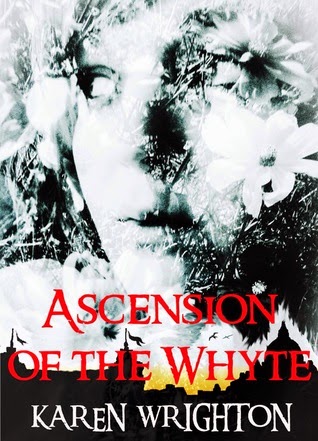 Sara Carson did not believe in life after death, Heaven, Hell or even reincarnation. However, what she didn't know was that some of us are special. For some of us, death is just the beginning of our next great adventure. Sara Carson was one of those special people, and her most incredible journey did not begin, until the day she died.

A magical début novel that will leave you breathless.

Sound Track for Ascension of the Whyte

1. Goo Goo Dolls - Better Days
This song would without a doubt be ideal for the title song. It is beautiful.... and the lyrics 'tonight's the night the world begins again' are just so apt for the beginning of Rose's journey.  This track always makes me feel as if no matter how bad things are, we should always look towards the future because there is always something good that is yet to come.

"After losing her earthly life Rose ascends to the Afterlands and is inducted into the Oratory of Aurum in the Golden city of Aureus."


2. ELO - Strange Magic
I have always felt that this track was so magical, subtle and intoxicating the music makes me feel as if there is more to this life than what we know and
what science can tell us. It almost lends itself to magical moments of the book, especially the soothing.

"Rose enters the turbulent waters of the impluvium where her new name is bestowed upon her by the Sooth."


3. London Grammar - Devil Inside
My daughter Anna, who is a big fan,  introduced me to London Grammar (thank you Anna!) This track is so ambiguous, beautiful and powerful in describing how evil can lurk within otherwise good people.  This is why I have chosen it as El-on-ah's theme.

"El-on-ah, a young Blood Alchemist, journeys to  Tollen's Gate with her servants and faithful pukis (a tiny dragon) in order to gather the means to resurrect  the great and powerful Blood Alchemist Lord Ka. However in doing so she unleashes a great evil unto the Afterlands."


4. Seth Lakeman - Race To Be King
I love modern folk music and decided quite early on that the Mud people would be the 'celts' of the Afterlands and their accents and music would be
celtic in nature.  This is such a rousing track I thought that it would be ideal for the festivities of the Ascension Feast.

"Rose  and her cell attend the Ascension Feast and are introduced to Ferrish fiddle music and such gastronomic delights as Guillywally Fyre-pot, cassava leaf soup and ginger and snow rose sorbet, as well as getting their first taste of honeyflower mead."


5. Newton Faulkner - Dream Catch Me
Newton Faulkner has long been a favourite of mine, and especially this song. As Rose eventually discovers her origins through her dream and it is within her dreams that she finally finds solace, I thought that this track makes an ideal theme for Rose.

"Within Rose's dream a feeling of unfurling weightlessness washed over her and as she watched her hands, then her arms, feet,  and finally her body dissolved until there was nothing between herself and the four.  Her sense of loneliness and grief gave way to feelings of fulfilment, love, contentment and of incredible strength and power."


6. I See Fire - Ed Sheeran Lyrics
This is the ideal track for when the Djinn and Affreet of Erebus attack the lands of Hydrargyrum, Ferrum and finally Aurum bringing a plague of fyre on their inhabitants.

"A red cloud gathered  in the skies above Hydrargyrum and a  thousand winged Afreet rained down their fyre on the people of the Afterlands."

7. Andre Rieu - This Land Is Mine
Last Christmas I attended an Andre Rieu concert in London and this song brought tears to my eyes. Many years ago it was a theme song for the film Exodus and so it makes an ideal theme for the chapter of my book which is also called Exodus.

"The novices watched transfixed as crossing the river and the plains, hundreds, maybe thousands of Bloods were fleeing; old, young, native and ascendants. On the plain, slightly ahead of the main
group a father carried a small girl...  Out of the sun swooped a cloud of red men, their reptilian wings spread out above them and then as if the gates of Erebus had opened, their fyre spears spewed out fountains of fyre that rained down on the defenceless refugees."

8. Richard Ashcroft - Break the Night with Colour
I have been a big fan of Richard Ashcroft and the Verve for many years. I love this song and for me it is perfect for illustrating how sometimes the best laid plans just don't go well and, especially if secrets are involved, there can be dire consequences.

"A fiery stream of red light shot out from El-on-ah's ring and hurtled towards rose. Arjan, a few feet from her did not hesitate..."

9. Seth Lakeman - Hard road (on your own)
My love for Seth Lakeman knows no bounds.... This track illustrates how difficult life is for people who don't fit in and so is an ideal choice as the theme tune of the Twocasts.

"Rose regarded them all, her eyes swept the crowd, taking in every detail; every child's tiny fist, every open sore, each hollow of every emaciated body and the hopeless, helpless shadows that clouded every pair of eyes."

10. Mike and the Mechanics - Someone Always Hates Someone
I have loved this song ever since I first heard it.  Its sentiments echo the sentiments of the last few pages of Ascension of the Whyte, which is why I have chosen it for the books closing title theme.

"Let us stand together against the evil tyranny of Ka and the Djinn of Erebus. Let us stand, not as Golds, or Muds, or Bloods, but as one people, as one cast as one race. Let us stand as Afterlanders!"


"Maybe one day Ascension of the Whyte will get made into a movie, and who knows, they may even use some of my suggestions for the score.  Enjoy listening to the playlist here".  Karen Wrighton. 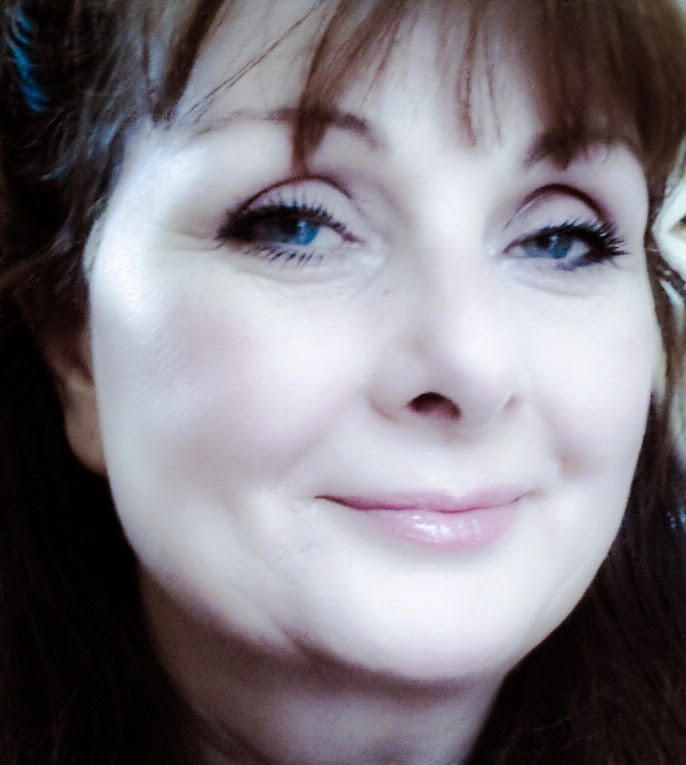 Karen Wrighton was born in a small town in the English county of Staffordshire and began writing prolifically and drawing from a young age. Karen trained as a Psychologist and Teacher before finally finding the time to pursue her love of writing, firstly by creating a successful Psychology blog and now by writing her first novel.

Karen's début novel 'Ascension of the Whyte' is a magical epic fantasy novel for young adults and is to be the first book of the 'The Afterland Chronicles' series. Karen's style is strongly influenced by the books she loves to read, such as Lord of the Rings and Harry Potter. This is evidenced by the magical quality that pervades her writing.

Karen has two daughters and lives in Norfolk, England with her husband John.

To find out more about Karen and her book, or follow her on social networks click on the links below.

There is a tour wide giveaway during the tour.
The prizes include;

- Author signed paperback copy of Ascension of the Whyte
- Themed metal bookmarks
- Postcards with graphics of the book cover and a colour map of the Afterlands
(signed by author if requested)
- Original hand-made Adder stone pendant like the one described in the book. 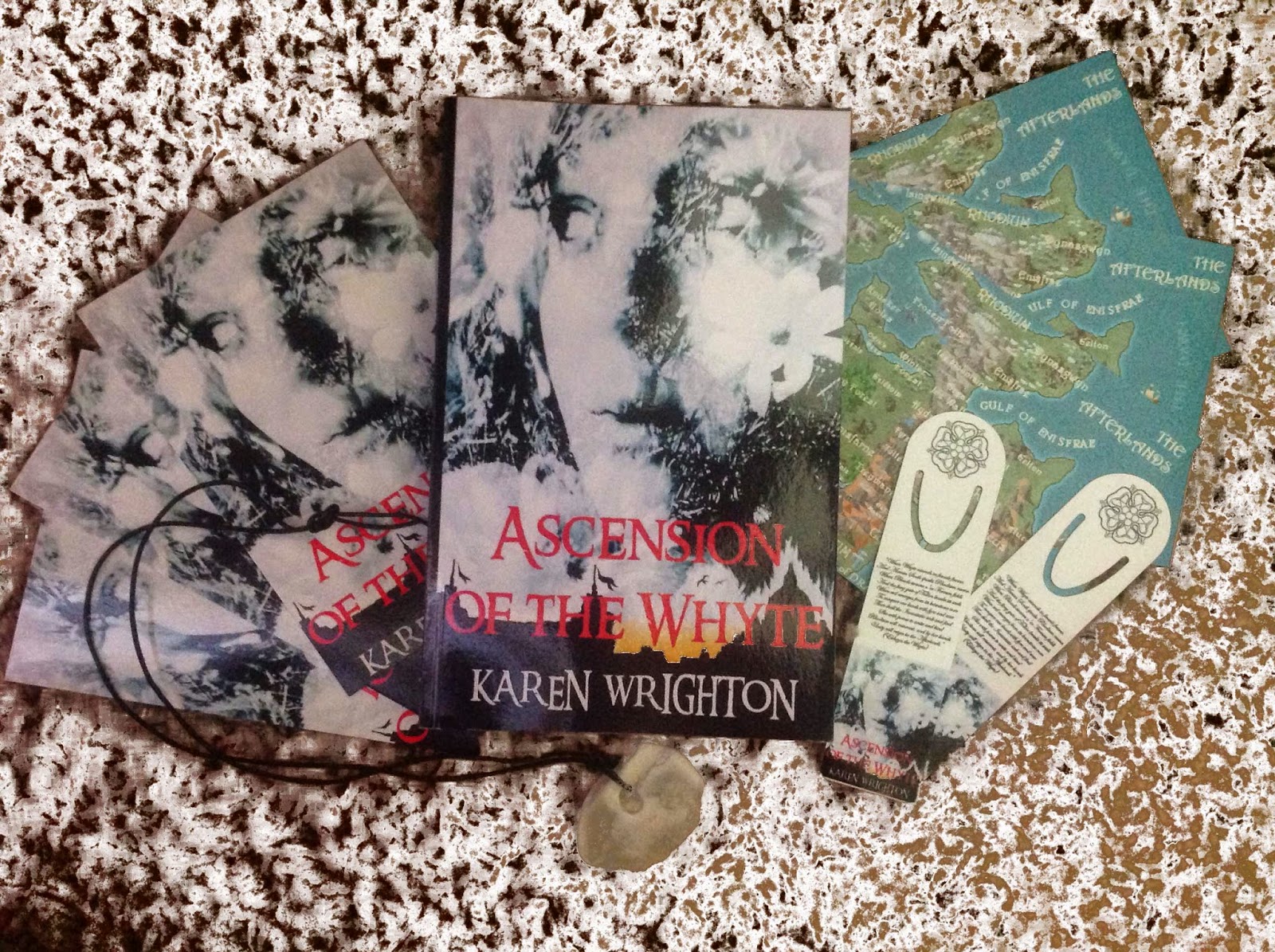