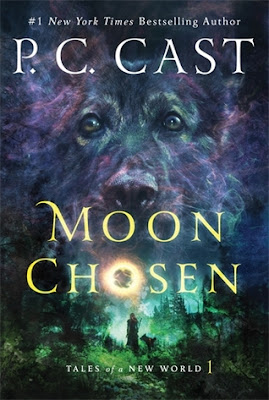 #1 New York Times bestselling author, P.C. Cast, brings us a new epic fantasy set in a world where humans, their animal allies, and the earth itself has been drastically changed. A world filled with beauty and danger and cruelty…

Mari is an Earth Walker, heir to the unique healing powers of her Clan; but she has cast her duties aside, until she is chosen by a special animal ally, altering her destiny forever. When a deadly attack tears her world apart, Mari reveals the strength of her powers and the forbidden secret of her dual nature as she embarks on a mission to save her people. It is not until Nik, the son of the leader from a rival, dominating clan strays across her path, that Mari experiences something she has never felt before…

Now, darkness is coming, and with it, a force, more terrible and destructive than the world has ever seen, leaving Mari to cast the shadows from the earth. By forming a tumultuous alliance with Nik, she must make herself ready. Ready to save her people. Ready to save herself and Nik. Ready to embrace her true destiny…and obliterate the forces that threaten to destroy them all.

Moon Chosen by P.C Cast is a lyrical and lusciously woven fantasy tale that introduces readers to a unique and promising new world of danger, romance, nature and the power of the moon!

Mari is an Earth Walker, daughter to her Clan’s Moon Woman and the person most expect to take her mother’s place within the Clan one day. Able to heal using a unique ability to harness the moons powers, as a Moon Woman Mari is expected to wash her people of a fierce infliction that leaves them raging monsters if left unattended. However, Mari is hiding a secret about her heritage, and when a deadly attack tears her world apart, Mari finds herself with a new animal companion and a broken heart. It’s not until Nik, the son of the leader of her enemies tribe, the Tribe of the Trees, comes into her life does Mari realise that not everything is as black and white as it seems. Choosing to work with Nik will see Mari have to embrace her destiny if she has any hope of saving her people.

Moon Chosen is a really unique novel in my eyes. It’s meant to be set in a future world, drastically changed, but features a lot of attributes and elements you would expect to see in ancient times. Having read some of P.C. Cast’s House of Night and Goddess books, it’s clear to me that Cast is an obviously spiritual woman, something that comes through in her writing. Moon Chosen features a lot of spiritual aspects reminiscent of the Native Americans with a twist with our heroine relying heavily on nature and the earth around her.

I’ll be honest and admit it took me a little bit of time to be won over by the tale, but once I found myself in a rhythm with the story, I really enjoyed Moon Chosen. It’s a very long, wordy book---almost 600 pages with small text--and admittedly some of the content within the story was lost on me or failed to impress, but for the most part I was very entranced by Mari and Nik’s journey.

In the very opening chapter of Moon Chosen I found myself worried that Mari’s voice may have read too young based on her mannerisms and conversations shared with her mother. It quickly became apparent to me that Mari had potential and quickly began a journey of growth and discovery throughout the story.

I liked Mari and I liked the characters who joined her, including Nik, Rigel and Sora who were standouts. Rigel was adorable as Mari’s shepherd companion and of course Nik was enjoyable to read about as love interest and friend to Mari whose voice was the second most prominent one we had the pleasure of following throughout the story. Sora was reminiscent of House of Night’s Aphrodite in my mind; a flirty unfriendly individual who fights with the heroine but then becomes a true friend along the way.

I’m actually really intrigued by the Companion’s and their canine comrades. It’s really interesting seeing how P.C. Cast has instilled this fierce and undeniable bond of love and loyalty between the Companions and the dogs that choose them. It was very sweet and I’m as equally as eager to see the cat version and their Companions of other tribes down the track, especially if the next book is going to feature Antreas and his lynx companion as I’m hoping it will!

Moon Chosen is a rich and descriptive first novel, kicking off the Tales of A New World series that has a lot of potential and leaves me keen to see what P.C. Cast does with it next!

Source: Sent for review by publisher (Thank you guys!)
Publisher: Pan Macmillian Australia
Format: Paperback ARC
Australian RRP: $18.99
Release Date: November 2016
Purchase: Bookworld | Booktopia | The Book Depository | Amazon
Final Thoughts: There's mixed emotions floating around the blogosphere for this book, but I quite enjoyed it and look forward to book two. I'm crossing my fingers that Antreas will be paired with Sora--I think that'd be an interesting pairing!