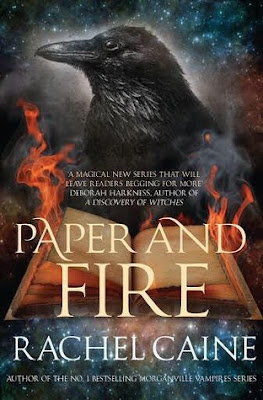 In Ink and Bone, New York Times bestselling author Rachel Caine introduced a world where knowledge is power, and power corrupts absolutely. Now, she continues the story of those who dare to defy the Great Library—and rewrite history…

With an iron fist, The Great Library controls the knowledge of the world, ruthlessly stamping out all rebellion, forbidding the personal ownership of books in the name of the greater good.

Jess Brightwell has survived his introduction to the sinister, seductive world of the Library, but serving in its army is nothing like he envisioned. His life and the lives of those he cares for have been altered forever. His best friend is lost, and Morgan, the girl he loves, is locked away in the Iron Tower and doomed to a life apart.

Embarking on a mission to save one of their own, Jess and his band of allies make one wrong move and suddenly find themselves hunted by the Library’s deadly automata and forced to flee Alexandria, all the way to London.

But Jess’s home isn’t safe anymore. The Welsh army is coming, London is burning, and soon, Jess must choose between his friends, his family, or the Library willing to sacrifice anything and anyone in the search for ultimate control…

Paper and Fire is the second instalment in Rachel Caine’s The Great Library series and is a wonderful sequel that expands on the vivid world introduced in the first novel in an engaging and addictive manner.

Having survived his introduction and training into the dangerous and mysterious world of the Library, Jess Brightwell has found that being a part of the Library’s employ isn’t what he expected it would be. His best friend is supposedly dead, the girl he loves is imprisoned within the Iron Tower, locked into a life of magic and servitude, and everyone Jess cares about remains in danger. Armed with secrets the Library doesn’t want known and burning determination, Jess and his close group of allies set about to rescue a lost friend, but as the Library’s automata and guards chase them across Alexandria, Jess and his friends must decide what they’re willing to sacrifice for the freedom of knowledge and the right to make their own choices….

The first book in this series, Ink and Bone started off slow for me, but by the time I reached the end boy was I looking forward to its sequel. And I don’t think Rachel Caine disappoints. Paper and Fire is a superbly detailed and told story. The world within its pages is so vivid and alluring—I’m entranced as I follow Jess; lost amongst the force that is the Great Library and the mission Jess and his friends find themselves on.

Personally I really enjoy the way the storyline is coming together in this series. Caine weaves different elements of her unique setting together and paints a dangerous Ancient/Middle Eastern like setting that blends with modern ideas and magic; managing to cultivate a unique and tangible society that is filled with luscious, appealing characters who support the story and bring it to life.

As a reader, I’m naturally drawn to female protagonists over their male counterparts and have only found a few throughout my reading history that I’ve really loved (Harry Potter, Thomas from Maze Runner and any male character of Rick Riordan’s) but Jess Brightwell is quickly cementing himself a place on that list too. I love the way in which Rachel Caine has written her main character and am very impressed with Jess’s voice throughout the series. Jess is clever and quick-thing, something that comes out throughout the story. He cares very deeply about his friends and it bleeds through the pages, making it impossible not to love him.

As I’ve previously mentioned, I adore all the characters in the story and love seeing them together. Jess has a strong support group and a bunch of amazing friends. They’ve already been through so much and Rachel Caine doesn’t seem to be letting up as our heroes are faced with touch choices, unexpected betrayals and new revelations in this sequel.

With Paper and Fire ending well and setting up the next instalment, I’m really keen to see Jess and his band of comrades take on the Library as they fight for change and freedom of knowledge! A great read—bring on the next one!