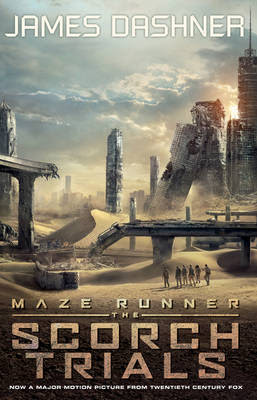 Solving the Maze was supposed to be the end. No more puzzles. No more variables. And no more running. Thomas was sure that escape meant he and the Gladers would get their lives back. But no one really knew what sort of life they were going back to.

In the Maze, life was easy. They had food, and shelter, and safety... until Teresa triggered the end. In the world outside the Maze, however, the end was triggered long ago.

Burned by sun flares and baked by a new, brutal climate, the earth is a wasteland. Government has disintegrated—and with it, order—and now Cranks, people covered in festering wounds and driven to murderous insanity by the infectious disease known as the Flare, roam the crumbling cities hunting for their next victim... and meal.

The Gladers are far from finished with running. Instead of freedom, they find themselves faced with another trial. They must cross the Scorch, the most burned-out section of the world, and arrive at a safe haven in two weeks. And WICKED has made sure to adjust the variables and stack the odds against them.

Thomas can only wonder—does he hold the secret of freedom somewhere in his mind? Or will he forever be at the mercy of WICKED?

The Scorch Trials is the second book in James Dashner's exhilarating and cryptic Maze Runner series and is another fast paced mysterious tale full of danger, excitement and the unexpected.

Solving the Maze saw Thomas and his friends escape it's dangerous confines, but as the Gladers quickly realize their rescuers aren't rescuers at all, they'll soon be forced to embark on the next stage of the trials if they want to survive. Stuck in a barren and burning wasteland, the Gladers have two weeks to make it across this desert land to reach a seemingly safe haven. But nothing is as it seems. Friends may not be friends and there's new dangers around every corner. Forced to cross the Scorch, Thomas will have to be stronger than ever if he hopes to save his friends.

Having enjoyed The Maze Runner, I was excited to finally begin the next installment in Thomas's journey and was impressed with The Scorch Trials. I'm aware of a lot of mixed reviews where this series is concerned, but so far I'm really enjoying it. Thomas is a strong voice to follow and James Dashner has woven together a story that continues to be exciting whilst managing to keep you guessing and wondering all the way through.

Sometimes when following a protagonist, it seems like all the answers are staring them in the face, while in this series, I never know what's going to happen next or what everything means. I have no doubt all these little clues and developments mean something but right now I'm just along for the ride as Thomas and the Gladers stumble their way to safety, and hopefully freedom. And I like that. I'm enjoying only knowing as much as my main character and learning as they do.

In this riveting sequel, Dashner continues to develop the overall series, adding in new characters and new layers to the plotline. Personally I quite liked the inclusion of Brenda, who proves to be a shakeup to Tom and Theresa's relationship as Dashner utilizes the aura of mystery in this series to twist and turn them until even you as the reader have no idea whose motives are pure.

As far as sequels go, I thought The Scorch Trials easily satisfied. The story jumped straight into the action and danger as the Gladers continued to fight for safety. The ending was a bit perplexing and leaves me with more questions than answers as James Dashner sets up the next novel.

Fast paced and exciting, The Scorch Trials was a worthy sequel and leaves me ready to dive straight into the next novel in the series, The Death Cure.