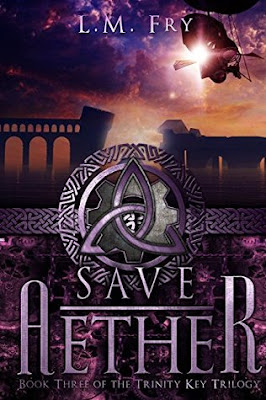 Julia never had a real family until meeting Theo and Valera. Now that they are united by the Trinity Key, they are plagued by nightmares. Danu, the goddess of Aether, is in agony and calls out to them to free her.


However, the Elders who rule Aether don't want to give up their power and warn the girls to stay away from Danu's tomb. Julia must decide whether to trust the Elders or to follow her instincts and unleash Danu upon the world.

Save Aether is the third and final instalment in L.M. Fry’s The Trinity Key Trilogy and is a fast paced and deeply enjoyable conclusion to what has been a highly enjoyable trilogy!

Having united the Trinity key, Julia, Theo and Valera must learn to harness and control the incredible powers burning inside them. For Julia, discovering her powers also means discovering family she never knew she had and learning to trust those around her; a feat that isn’t easy for a girl who has been alone for most of her life. As all three girls are haunted by terrible nightmares where the goddess Danu calls out for help, Julia, Theo and Valeria must decide whether or not they will listen to the Elders of Aetherland or go with their guts and set the goddess free. Either decision will be dangerous, but will their choice not only be deadly, but fatal?

L.M. Fry’s Trinity Key trilogy comes to a close with Save Aether, another fast paced and entertaining novel in the series. After the previous book, Julia has now got her abilities as one of Danu’s daughters, able to control ice and the aether around her. Continuing to unfold through the perspectives of all three heroines, Save Aether sees a lot of developments and revelations to the storyline. Readers may be in for a surprise as the sisters learn the truth about the Trinity and what it means for them.

I’ve really enjoyed following the Theo, Julia and Valera throughout the trilogy. They’re all so different, but have worked well together. Their different personalities and backgrounds meant that they brought new perspectives to the story and I liked seeing them connect with each other and really become friends, even if Julia got off to a rocky start with Theo and Valera in the beginning of the series.

All the characters that supported the girls in this novel were great to read about but I have to admit, the hopeless romantic in me loved seeing L.M. Fry pair off each girl with a love interest as the series progressed. And best of all—no love triangles! It was simply Theo and Victor, Valera and Gideon and Julia and Eli—the cheeky guy who won Julia’s heart in Save Aether.

I’ll admit, I was a little perplexed by the ending of Save Aether; mainly the final few pages. Overall L.M Fry leaves the story with enough to hope that the characters will pick up the pieces of their lives and Aetherland, but at the same time, I think I wanted just a little bit more. I wanted to see a bit more of what happened after the final showdown with Danu; what happened to Theo, Julia and Valera and their guys? What happened to those left displaced after the destruction of their homes? Not everyone escaped unscathed—how did those characters handle their losses?

And yet, I understand why Fry ended the series as she did, even if I’ll miss Theo, Julia and Valera. Weaving steampunk with magic, The Trinity Key Trilogy is well worth a read for those who like spunky heroines, romance and plenty of action. I definitely recommend!