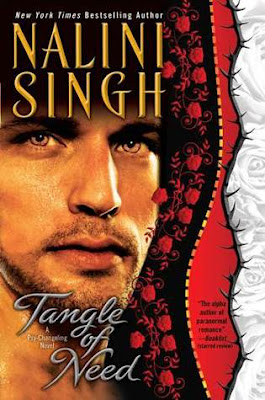 Adria, wolf changeling and resilient soldier, has made a break with the past—one as unpredictable in love as it was in war. Now comes a new territory, and a devastating new complication: Riaz, a SnowDancer lieutenant already sworn to a desperate woman who belongs to another.

For Riaz, the primal attraction he feels for Adria is a staggering betrayal. For Adria, his dangerous lone-wolf appeal is beyond sexual. It consumes her. It terrifies her. It threatens to undermine everything she has built of her new life. But fighting their wild compulsion toward one another proves a losing battle.

Their coming together is an inferno…and a melding of two wounded souls who promise each other no commitment, no ties, no bonds. Only pleasure. Too late, they realize that they have more to lose than they ever imagined. Drawn into a cataclysmic Psy war that may alter the fate of the world itself, they must make a decision that might just break them both.

Tangle of Need is Nalini Singh’s eleventh novel in her Psy- Changeling series and is another deeply sexy, sensual and exciting PNR that doesn’t disappoint.

Lone wolf Riaz Delgado was thrown through the wringer after he found his mate, only to learn she was married and deeply in love with someone else. Returning to his beloved SnowDancer pack hoping to heal and lick his wounds, Riaz finds himself struggling with the fierce and blinding attraction he feels towards fellow pack mate Adria, a woman with her own scars and someone who awakens Riaz long lost heart.

Adria Morgan in a dominate female solider who recently got out of a relationship with a man less dominant than herself and whose issues left her second guessing herself. The last thing Adria needs is to be involved with someone like Riaz, but there’s no denying the way he makes her feel. Torn between not wanting to betray the mate he can never have and the intensity he feels for Adria, Riaz and Adria begin to seek comfort in each other’s arms and what began as a way to offer support to a fellow packmate soon begins to burn hotter and hotter, making both wolves consider whether their chances at happiness aren’t as impossible as they first appeared……

Tangle of Need was a really interesting novel in the Psy-Changeling series. As with all the previous novels, it was fast paced, exciting and featured a wonderful sexual chemistry between the main couple. Singh is yet to leave me displeased with one of her novels, but I also thought it was interesting how she explored the mating bond Riaz shared with his discovered mate. Throughout the series we’ve focused heavily on the importance of ones mate to an individual, so it was fascinating to see Riaz choose to forsake the bond as he fell for Adria.

Don’t get me wrong, the relationship between Riaz and Adria was beautiful—it showcased how two people can heal each other and how the bonds developed as people, not wolves and mates, can be just as strong and powerful as their counterparts. I loved the way Nalini Singh showed us another way two powerful and dominate personalities can fall for one another and experience a relationship.

I liked both Riaz and Adria. They were solid characters to follow and read about. They both came with pasts and baggage and Singh doesn’t shy away from the fact both have felt pain. Seeing Adria especially come from a decade long relationship meant she had to deal with her pain and eventually let go if she hoped to have any future with Riaz. I felt this was done well by Nalini Singh.

Tangle of Need continues to see the civil war between the Psy persevere. Different factions are continuing to challenge one another with the Pure Psy determined to implicate total Silence once more, regardless of the ramification. I liked seeing the Changeling packs support their Psy associates and I’m growing even more intrigued by the Arrow’s and the human Alliance. I know Aden and Vasic feature in books, but I’m keen to see if Alliance leader Bowen gets his own story down the track.

Once more filled with the characters I’ve come to know and love, Tangle of Need was another great novel and I can’t wait to dive straight into the next novel. Kaleb’s story should well and truly be an interesting one!

Source: Purchased from The Book Depository
Publisher: Berkley
Format: Paperback
Release Date: May 29th 2016
Purchase: Bookworld | Booktopia | The Book Depository | Amazon
Final Thoughts: Another great book in the series--I'm ready for the next one!